What kind of pie? Occupy 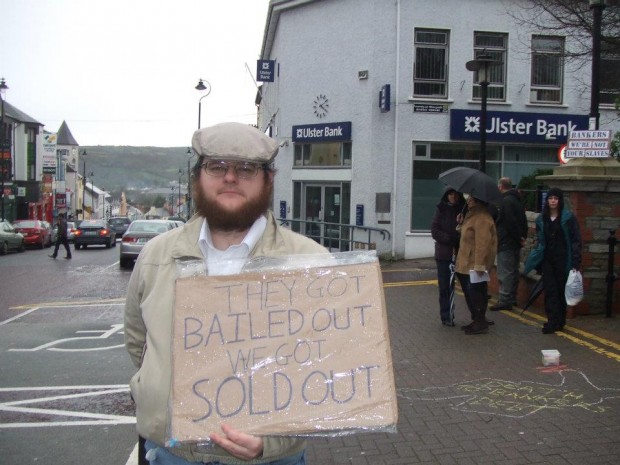 So I haven’t been to my local occupy event in a while now. It’s a small event, only running for a few hours on a Saturday. There’s no permanent encampment, not a lot of chanting goes on, not much in the way of flash mobbing. But it’s our group and it’s got some very honest and genuine people that are just trying to make the world a better place.

So why haven’t I gone down there in weeks?

I’ve had a different reason almost every week that I’ve gone there: first off I was protesting because the Irish government was bringing in water charges, which is a nice way of saying that they’ll be installing water meters on every home and business in the land and then taxing the water that’s used.

I was against this move because this creates a completely new tax on people who are already struggling. This won’t affect the rich that have second and third homes, this is just another charge that it’ll be hard to pay for those that are struggling. That and this whole thing is going to be handed to a semi-state company and I’m against privatization of public services. So I went and protested.

I protested that for a while and then one night I was sitting up watching a livestream and I saw Scott Olsen go down. I saw the Oakland Police throw a flashbang at a group of people that were attempting to pick Olsen up after he had apparently been hit in the head with a tear gas canister. He suffered a fractured skull and one month after being in a coma for several days he was still having trouble talking. So I went and stood when Scott Olsen could not and protested.

I protested because there were austerity measures, I went to stand up for the Greeks, I protested because Silvio Berlusconi [A man who I disagree with politically] was ousted from office and was replaced by an unelected banker, Mario Monti.

Something wonderful happened recently and that was that PBS now has a presence on our cable package [Sky+ to the Irish and UK readers] I saw a documentary that looked interesting so I set it to record but I accidentally put a series link on it, and the next time I looked at the cable box there were easily ten documentaries on there with subjects ranging from The Pill and Jewish war memorials in Berlin to… the financial crisis.

The financial crisis documentary wasn’t about the recession as a whole, or the economic downturn, or the housing crash: it was about a very specific period and that was the first two weeks of the crash. Bear Sterns was crippled, and Lehman Brothers folded. The fed stepped in to save Fannie Mae and Freddie Mac. It was a very tumultuous time.

What I learned while watching this documentary was that the fed didn’t want to bail out the banks, Obama didn’t want to sign the bailout bills, nobody wanted to be in this situation. The main problem with Lehman Brothers was that it held insurance policies on debt. These policies were called “Credit Default Swaps” and they essentially said that Lehman would pay anyone that bought debt from them in the event that that debt were to default. It didn’t become apparent how toxic this debt was [Subprime mortgages] until after Lehman had collapsed. This is why the fed stepped in to bail out Fannie and Freddie after Lehman failed.

I also learned how all this affected me personally in one fell swoop; my mother was in the room when I was watching this documentary and she told me that Lehman Brothers held a huge stake in a liquid gas storage facility in Wales. A company called Watson Norie, a contracting group worked on that storage facility. That company and several others incurred devastating job losses as the funding for the project started to waver.

My father was one of those that lost his job. It was a good job; he was working as an electrician for 1,000 pounds a week. He sent money back to my mother to pay the mortgage here, to pay the bills, the car payments – everything. He lost a well paying middle class job because Lehman Brothers went bankrupt in September of 2008. He got another job shortly afterwards, but the bubble had burst and that job fell through as well. He was unemployed for over a year before he found a new job that pays substantially less, is non-union and the boss is skimming from his pay.

How could I reconcile this with hating the banks? The banks created that job, and they also destroyed it. My father wasn’t a greedy man, he wasn’t involved in credit default swaps, or predatory lending or bankruptcy. He was just a hard working guy that got shafted.

For days I mulled over this information, trying to make sense of these facts and attempting to reconcile them with my political beliefs. Political beliefs, as I learned, can be much more fluid than you’d think. I looked into taxation numbers in Ireland, and in the USA. I delved deep into the facts and figures of the crash, I found out what a derivative was [Though I have not yet mastered how to explain it] I learned.

Occupy has taught me a lot about learning, and opening my mind, and forming a concrete position on something. But after learning that the Lehman collapse had killed my father’s job I realized that the concrete of my political views had not yet set.

Between looking at the figures, the inter-connectedness of it all and the documentary I learned how deeply rooted in sand the banking industry was. This was a massive house of cards and all sectors of the economy were tied to it. There are no simple solutions – none.

So where does that leave my ideals? It leaves me in favour of the 100 euro property tax on homes. And even somewhat in favour of the water charges. My positions were now divergent from the Occupy group which I had attended.

I believe that the banking crisis was caused by a lack of government regulation and oversight. Nobody was held accountable, and when the shit hit the fan everyone was now accountable. There is a level of personal responsibility that I hadn’t factored in.

Yes; the banks had predatory lending procedures that took advantage of people.
Yes; Lehman and the rest had built billion dollar empires from spit and sticks.
Yes; We should never have taken out those loans, and the government shouldn’t bow to the banks.

We can pick over this carcass for years and it might get us somewhere. Forgetting the mistakes of the past will get us nowhere. I think that moving forward collectively is the way to go.

And what’s more collective than government?

I’m going to pay the household tax and the water taxes for my mother because not only is it good for my family to avoid fines; it’s good for the country.

I don’t like saying that because I’ve never considered myself a patriot. I don’t believe in blindly following the orders of the government because they happen to be the government.

Any taxes collected in a time of low spending will go to things that are a greater good for all of us. This is not the time to be isolationist, to shun Europe, to spit at all the advances we have made since joining Europe, and the Euro.

We’re in tough times. The richest are not enduring tough times and that needs to change. They need to take a bite out of this big horseshit sandwich too. They can pass it on once they do, but they have to take their bite too. Sitting there and holding the sandwich and saying that the rich guy needs to take a bigger bite is a very valid point. But the sandwich won’t get around to him again if you don’t take your bite and pass it on.

I’ve been unemployed for over 3 years. I’ll be emigrating soon. And when the household tax bill comes through the letterbox of my mothers house in County Donegal she’ll send me an email, and then I’ll send her a check. I want to make sure that my mother doesn’t have to worry about them garnishing her disability allowance to pay the new taxes. But more than that, I want to make sure that this country endures.

We’re a hard working people, we can fight our way out of this. Occupy is doing whatever it can to make sure that this country endures, the best way they know how. I’m not going to tell Occupy how to protest.

I don’t know if I’ll occupy again. But I’m a registered voter now. I’m happy to pay the extra 25 cent tax on a pack of cigarettes. I’ll keep fighting for my slice of the pie but I’ll also do whatever I can to make sure that there’s enough pie for everyone. What kind of Pie?