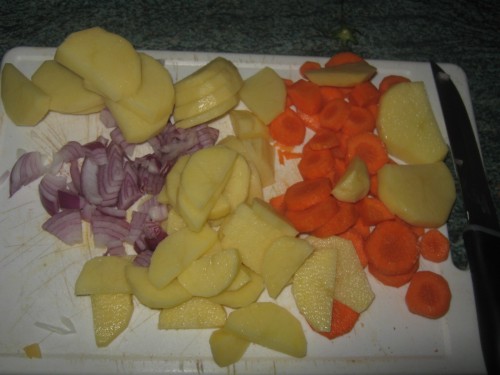 Ok so this one is relatively easy. I realized that a pepper sauce that involves a dairy product is nasty as all hell. So I replaced the dairy product with red wine. And it worked like a charm.

It’s a very simple recipe, so simple in fact that it’s printed on the back of the spice packet I bought for this. But I’ll tell you what I did anyway, after the jump.
And of course, more pictures.

1. Cut some steak up into cubes (400-600 grams)
2. Fry the steak
3. While the steak is frying chop 1 onion and 2-3 carrots
4. Mix the spice packet according to the directions, with wine in place of milk/cream
[I hate putting that sort of thing in a recipe, but I don’t have the packet anymore, and it’s likely to be different on different packets of Pepper Sauce]
5. Cut up some potatoes
6. Place potatoes, carrot, onion, meat and pepper sauce into a casserole dish
7. Optional – Place slide potatoes on top of the casserole
8. Bake for as long as you want. This is really to just cook the vegetables in the sauce.

And here is the result. 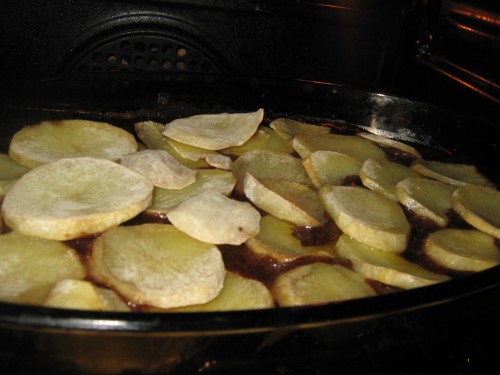 In retrospect I wouldn’t put the sliced potatoes on top, mainly because they became rather hard.
Next time I’ll just stir them into the sauce.

That said, I lived on that casserole for 3 days.
First day hot out of the oven, second day heated up as leftovers, third day it had morphed into a pie. There wasn’t a lot left on the third day though. It kept well. Casseroles always will.