The Zinc Saucier [that’s me by the way for those of us not paying attention] is hard at it again, but this time I’m making a childhood favourite of mine: Beef Cobbler.

As far as I know mema got this recipe from a cookbook she purchased somewhere in the 70’s or 80’s and she’s been making it ever since. I found my recipe here. But I’ll have to admit that I didn’t follow it religiously, mainly because I didn’t have all the ingredients. 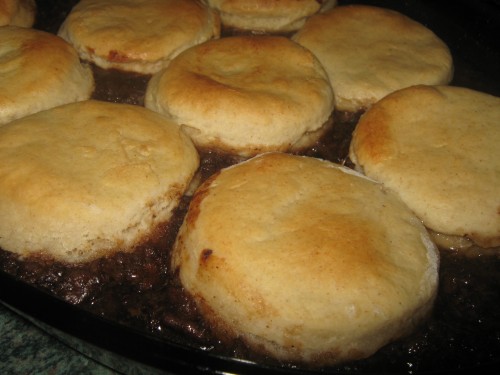 After the jump there are details of what I did differently.

I used ground beef instead of stewing steak and I used 4 times as much meat.
I used less onion and threw in a handful or 2 of chopped mushroom.
Generally mema uses oxtail soup instead of gravy and that’s always delicious.
I forgot to make potatoes until it was too late, so the portions were mostly meat with scones.
The dish I made, if made with potatoes could easily feed 6 or 7 people.

Oh and the recipe doesn’t say this but you have to brush the top of the scones with milk or egg, otherwise they’ll be crunchy on the top without being properly baked all the way through.

If anything I’ve shown the versatility of ground beef and how easy it is make a good meal.