Why hello there and welcome to Edition 1 of…

The Mad Carpenter cooks. Or – The Zinc Saucier.
Name the reference, get a shout out.

I’ve wanted to cook home style southern Biscuits for ages. It’s something that’s been cemented into my cultural knowledge of America: Biscuits and gravy.

After much research into the subject I found a recipe I could follow, and that would explain that shortening was hog fat, and I could just use butter instead. 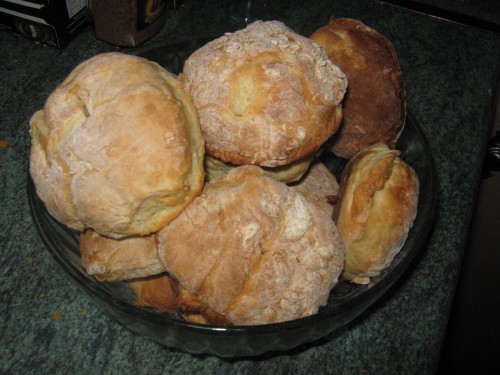 Don’t they look fantastic? Sin and I also made some home made fried chicken, which didn’t turn out fantastically, but it was still good.

I didn’t find out what the “gravy” part was until after we had eaten, and apparently it’s sausage grease, with flour and milk in it. And chunks of sausage.

The cost of all the stuff for the biscuits was less than 7 or 8 euros, and the batch of 12 biscuits did 3 people for one meal, and the rest did me another 2 meals. They’re tasty, but I imagine since I didn’t use buttermilk or hog fat, they were just big tasty scones. It took me an hour, and I’ve never really baked before.

So go for it. Make some biscuits.

These Zinc Saucier posts could very well be few and far between, but they’ll build up over time. Catch you next time.