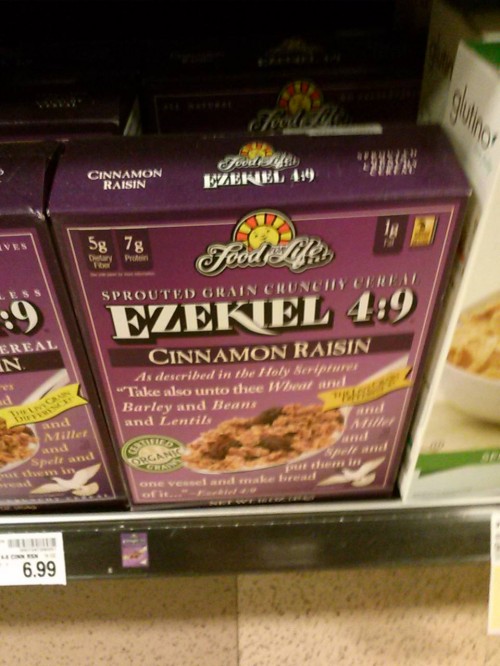 When entering a grocery store, or any shopping establishment, you have a general idea of what will be on offer. Usually if you walk the perimeter you’ll find your grocery staples like your bread milk, eggs and whatnot. Within the aisles is where you find the cultural differences. Sure the perimeter will usually hold local cultural variants of familiar items, but the difference is deepest the more you venture into the very heart of the store. And therein I found religious breakfast cereal and realized that I was a long way from home.

Journeys never actually begin. What may seem like a series of logical events, is more a random scattering of happenstances that coalesce upon reflection. So you could say this journey to America began in 2008 when I first talked in depth to the woman who is now my American wife. Or it began when we fell in love a few weeks later, or shortly thereafter when we decided that I was going to visit in a year’s time. But it could have easily began when I decided to venture into a media studies degree in college instead of going into engineering, which would likely have been the more lucrative career. However as much as a journey can truly begin, this one began on Hallowe’en.

After an attempt to stay in 2011 fell through we began working on the process of immigration for fiancees. They call it the K1 fiancee visa, and for two years we diligently filed the paperwork when requested and we waited. During the early part of this two years, after my return from California, I inhabited what could be called a depression. I was sullen and withdrawn so after a month or two of moping I decided that I needed to fill the time between leaving and returning with distractions. And those distractions were fun; I brewed beer with my brother, we made a video series out of it, I quit smoking and took up vaping. And after patching up the most important friendships in my life I began playing Dungeons and Dragons.

The immigration process is tedious because time is so elastic. This last year in the US has felt like no time at all, but those two years stretched into a decade as I waited. A large part of my existence for over a year was a single minded focus on returning to the US to finally marry the woman from which I was at the time separated. Focusing on the minute details of immigration policy and the stacks upon stacks of paperwork that are variously; required, optional, advisable, mandatory, necessary, and useless doesn’t make one a great conversationalist, and often not a great friend. My friends and family grew to understand though, and the last year of waiting was so filled with support it was almost too difficult to leave.

I was awarded the visa in the summer of 2013 after jumping through the requisite hoops (which is a chapter all to itself) preparations to leave truly began. All that time that had preceded that moment disappeared, and all the time that remained seemed so very short. No longer was I just another Irishman, I was an Irishman that was leaving. There is little way to explain the feeling that resides within when you know you’re leaving somewhere. When your life goes from stretching infinitely in front of you to being on a clock, your perspective shifts. The date of the flight wasn’t even set until a month beforehand when the ticket was purchased, but the date was finally set – Halloween.

I travelled over 24 hours straight to get to the Phoenix Air Harbour airport, via a card ride from Donegal to Dublin (thanks Kev) to JFK in New York, to home. Home shift while on the flight – I didn’t have a return ticket, so somewhere over the centre of the United States where the darkened clear sky perfectly reflected the twinkling lights of towns below, this land became closer to home than home did. Everyone has their horror story when it comes to flying, and mine I can assure you is as boring as all the others, but this journey felt unlike any other.

It’s an odd space to inhabit, the headspace of an expat, or an emigrant, or even an immigrant. All you’ve ever known, and what I knew wasn’t a whole lot outside the county of Donegal, begins to fade a little. It becomes a place where you were a different person, enduring a different set of circumstances. The you that was doesn’t cease to exist, but it becomes a photograph. Sometimes when you look at family photo albums, especially if you do it often, the memories become inextricably linked to the physical object that is the photo itself. You don’t remember those feelings you had, or the elation of the day, or what the air smelled like that day on your tenth birthday, you just remember the photo. When the photo represents everything you’ve ever known it’s quite scary.

What’s even weirder is the knowledge that you need a new photo now. You must construct a new identity that grows in this new place. You need to be a new person to fit these new circumstances, and the mind wishes so much to hold onto the previous identity that I understood that desire among British people to move to the Mediterranean and drink British sized pints of stella artois and eat chips in pubs that look like home, and have two day old copies of the Daily Mirror. The desire to belong exists in us all, but especially in the immigrant. But going out for pints of Guinness and wearing green, and listening to the music of the old country just makes the memories of the old life resemble a photo more and more. Living the old life in the new place isn’t a new life at all, you just like it because the weather is different.

I feel like it’s important to embrace the new culture. This place isn’t the old place; so why would you want to be the old you? Creating that new photograph, that new mental space and that new identity is the only way to actually keep the old one intact. Observing your surroundings, immersing yourself in the new life, considering the possibility that one day you might start saying ‘aluminum’ instead of ‘aluminium’ because this is where you live now, and this is who you are. Dualism is not necessarily cognitive dissonance, but when everything is so different it seems like it would be easier to retreat within, and hide in the old ways. But that way lies further dissonance, and further desire to eat chips in wood paneled pubs while reading the news from a place where you don’t live any more, a place where your heart should no longer live.

So you watch the local television, you drink the local beer, you eat the local food. You go to the grocery store, and you start wandering the aisles, and you start gravitating away from the ethnic section, because that’s where your stuff is. Side note – it’s weird that people consider you exotic, or ethnic. It’s very othering, but alienation is another chapter heading for another day. You walk the aisles and you buy the staples. You find your feet in a new country and you’re of the opinion that it couldn’t possibly be as different as you’ve made it out to be in your mind. And then you see the religious breakfast cereal.

Far be it from me to question the faith of others, which is exactly what I’m about to do so I guess it’s actually quite close to me, but why do you need your breakfast cereal to be decreed as holy before eating it? The cereal in question is called Ezekiel 4:9 and the passage on the box, and in the bible reads as follows:

Take thou also unto thee wheat, and barley, and beans, and lentils, and millet, and fitches, and put them in one vessel, and make thee bread thereof.

As you can imagine, I was thoroughly confused. I get that there’s a bread recipe in the bible, though I’m sure it’s not the world’s greatest cookbook. In my mind there’s two reasons that this breakfast cereal exists: either it’s your calling, or it’s your marketing. If it’s your calling, you’ve decided that this holy loaf — as brought down from on high, as dictated in the good book, as sanctioned by God himself — is what you’ll dedicate your life to. You’ll build up your business, you’ll get your supply chains on the go, you’ll bring this blessed raisin bowlful to the tables of the God fearing to fuel them through days of piety. Or you’re full of shit, and you’re marketing this to the niche market of people that requires sanctity from their morning nourishment. I guess cinnamon toast crunch is the tool of the devil or something.

In my esteem, each of these options are equally likely, and equally valid expressions of the American experience – extremely honest representations of hard working, good natured living, or bullshit artists trying to exploit good natured saps, and I mean that in the nicest PT Barnum sense of the phrase ‘bullshit artists.’ It is an art afterall.

This breakfast cereal epitomized something for me, and it brought to clarity a hole that had been in my thinking: I was not at all prepared to be an immigrant, I had only prepared to leave. My existence had been tied up for years in the concept of being a leaver, and there was a big gap where being an arriver should have been. The flight itself, the act of leaving, the selling of possessions, everything that happened on that side, and even the arrival in the US was an end. Could even call it a fairytale ending, given that I got married two weeks after arriving.

But it was a beginning. A beginning that I was woefully underprepared for, and that breakfast cereal showed me the folly of my ways. I wasn’t over Kansas anymore, making the switchover to a new home. I was in a grocery store in Arizona, shopping with the woman of my dreams at the beginning of a new normal life, and apparently that new normal included religious breakfast cereal.