Today we make a a pizza pocket. Simple as that. Well not quite that simple. 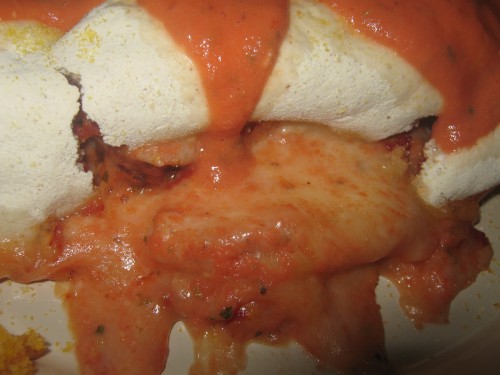 So this recipe was a bit of a mixed success. I didn’t like the taste of the cheese combination I used, Sinead wasn’t a fan of the sauce. So I’ll have to perfect it at a later date.

Here’s the recipe I sort of followed. I used some gluten free pizza base mix stuff… that was not very good. It didn’t knead well. And the corn meal, polenta stuff was damn hard to come by.

I put sauce inside the calzone unlike the video, I probably used too much cheese.
I split 4 large chopped sausages between three calzones, and that worked incredibly well.

The recipe is pretty well contained and it has a video with it, so happy days.
It’s easy to make, very hard to perfect. Pretty much like all cooking.
So the response was mixed, but none of us regret eating it.

Look after the jump for a picture of an uncooked calzone.