Let me just say right off the bat, this turned out much better than the peppered steak.
But it isn’t peppered steak so let’s move along with this.

First a picture of the finished pie, then the recipe after the jump.

Piece of pie really. The whole process that is. Ah, punderful.

First off I tossed the steak pieces into this little crockpot. 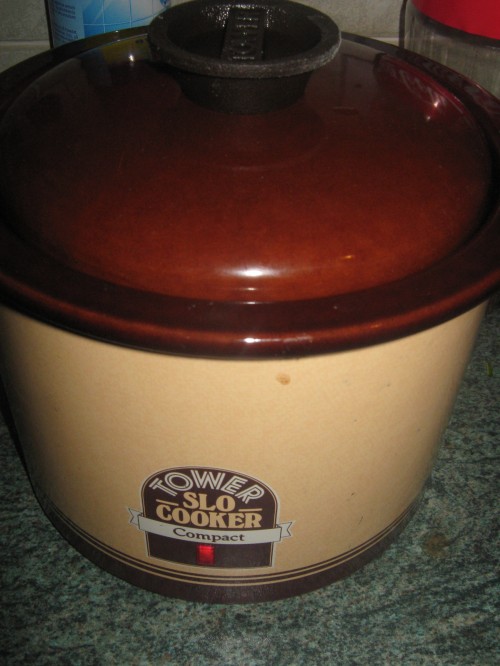 Then I added gravy and let it cook away for 3 hours. The meat was cooked through in 3 hours, but the longer you leave meat in a crockpot the more tender it is at the end.

The pastry didn’t turn out exactly as planned. I found out about half way through I was using 2 different recipes – one for puff pastry, one for shortcrust. Shortcrust is easier so next time I’ll be going with that. Here’s a shortcrust recipe

Pastry is a little tricky, so take your time.

Divide the pastry in 2, then roll it out to the just over the size of your plate. Apply the base, then add meat and gravy filling. Brush the edges of the crust with beaten egg and place the pie top on.
Cut some holes, in the top to allow steam to escape.

Cook the pie until the crust is browned. Apply milk to the pie crust to make it a little browner when it’s done.