I’ve never really made it public on this blog about my intentions regarding… life I guess.
Often I sit around and wonder what I’m supposed to do with this blog, and the other day Kimberlee my beloved suggested that I blog about what my plans are. My plans are incredibly simple, but incredibly complex at the same time:

Move to America on January 31st.

I went back and forth to how best to start this process and like most processes it starts with cash.
This whole thing won’t be cheap and the primary expense is the plane ticket. It’ll probably cost anywhere between 550 and 650 euros. That’s a wedge of cash in my books and I think a lot of us would have trouble raising that sort of scratch in the current economic climate.

So I decided to start selling things. The first thing I decided to sell was a burberry coat that I own. I picked it up about a year ago, maybe a year and a half. I never wear it, because it’s too nice to wear. I know it’s stupid. 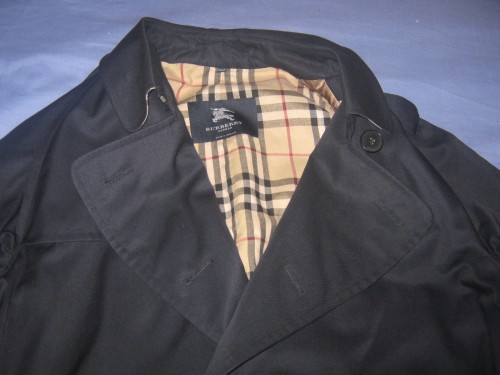 The knock back referenced in the title is my first attempt to sell the coat. It didn’t sell.
This was an immediate shock to me, least of all because it’s a genuine Burberry Coat; I’d assume people would have my arm off for it at that price. It’s missing the belt, but that’s the only problem with it.

It was difficult to understand that it hadn’t sold. I had to consider an unpleasant idea:

What if I can’t sell any of my stuff?

I spent the rest of the day rolling this over in my mind. Yeah, gamestop will take my DVDs, and any clothes and nick-knacks can be given away if I run out of time. It’s likely a lot of stuff will go to charity shops. But if I don’t sell my stuff, then that’s a significant amount of cash I had planned on being in the budget… not being in the budget.

Well you know what – fuck it. If I give up at the first hurdle I’ll sit here in this chair, in this house, in this place and I’ll never get anywhere. Sure, I might get a job, or find a woman, or any of that shit.

But that job won’t be my dream job and that woman won’t be Kimberlee.

No compromise, no surrender.