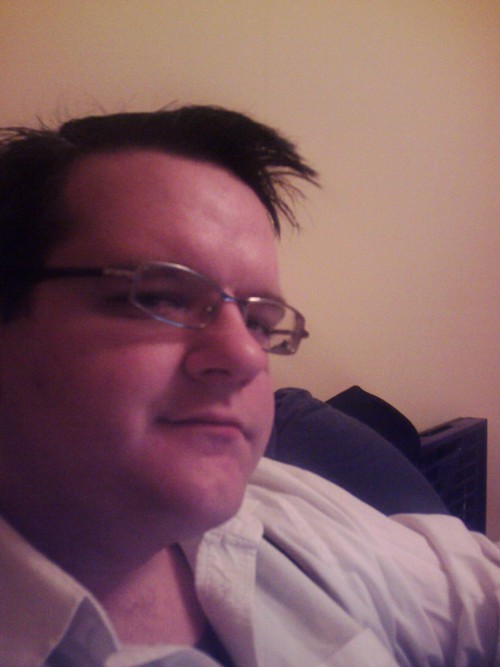 If I look contented in this picture, it’s with good reason.
I love doing things, especially handyman sort of things, so today, after getting back from collecting some money from the government; which had been lying in the post office since last Thursday, and no one mentioned to me until I trekked across town in morning traffic on a bike by the way… I’ve forgotten my point…

Oh yeah! The handle on Mary’s door was all keh-fucked, and I had offered to fix it. So after taking it apart and swapping handles between doors I thought I had it sorted. I moved the handle, and a god awful squealing chilled my handyman soul. I needed to lubricate the handle, but I didn’t have any WD-40, so I did what anyone would do…. Looked for another type of oil. I found cooking oil, and it worked really well.

Feeling full of man-pride, I decided to tackle the doorbell. For some reason, it just wouldn’t ring. Took the button off the door and found a little fuse looking thing which had, well… fused. It was broken. It was glassy in the middle though, not like a household plug fuse, so I set off walking into town as the sun was shining and I was being carried by my man-pride.

I showed my little metal and glass trinket to every shop employee I could find that worked in a shop relating in any way to hardware or electricity. Walked at least 2 miles back and forth around town, each shop assistant telling me to go to a different shop. Cut to 5 shops later. An hardware wholesaler, Irwin’s Electrical on the port road.

And say what you want about customer service these days, but those two old guys were helpful beyond belief! They took their time examining the little thing I showed them, and they told me it was actually a little light for behind the doorbell, and since it was fused, it wasn’t completing the circuit. Sold me a replacement, after making sure it was as close to the right thing as they could sell me, and then give me a receipt. Told me to come back if it was the wrong thing for money back and everything.

Got a taxi home, for I had the feet walked clean off me, and started working on the doorbell again. The copper contacts inside were grubby, the plastic casing was full of dead spiders, the wiring was corroded… nightmare.

So I bent the copper into the right place after cleaning it, stripped the flex cover off to expose clean wire, reassembled the unit, slotted the little fuse-bulb into place and pressed the button with gritted teeth.

My heart has never swelled more at such a simple “Ding-Dong”.

I had a moment of man-triumph today. And damn it all if it didn’t feel fantastic. It’s the simple little jobs that take the longest, but it’s so fulfilling to have something WORK after you’ve put in so much effort.

Oh and on a side note, I bought a decanter today, Put a deposit on it two weeks ago. It’s worth 150 euro, I got it for a third of the price. I’ll do a post about it tomorrow.

The moral of today’s story is: If you can fiddle with it until it works, why would you call someone to do it for you? It’s so satisfying to wipe the rust and grime off your hands knowing that something works better now than it did before you decided to fix it.