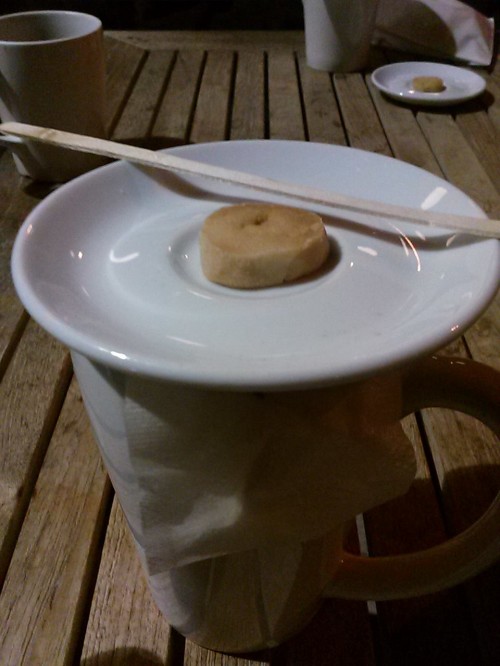 You see, it's a tiny biscuit, or a massive biscuit here. No in between.

And they are up all night. Because the coffee shops, unlike most, are open at 4am and 5am to cater to the early morning crowd. The coffee shops are open until 1am, or until 4am the next day, and there’s a coffee shop near my house that never closes during the college months because it’s right next to a college campus. Every hour of the night and day there are at least 4 or 5 people there, either getting an extremely early morning, or a very late night. I wonder sometimes if people are there sobering up after a night on the town. They offer coffee to sober up the drunk here, at least they do in the movies. Irish people are offered a door by which they can exit if they’ve had too much to drink.

It’s intrigues me, this coffee obsession, because I do not drink coffee. I make it in the morning for my American wife, I spend time at coffee shops with friends, I grind a bunch of it at the grocery store for my American wife to drink later. But I’ve never consumed it. I like my drugs to be a background hum, a subtle noise, just enough to take the edge off. A cup of tea in the morning doesn’t feel like it gives me a lot of pep, it doesn’t crank my eyes open and force me awake. But it’s absence will cause my eyelids to creak downwards in tiredness and crankiness. Similarly I vape to derive a low level of nicotine; I like to coast, I don’t like to race. But the way these people drink coffee, you’d think they had hot bean water instead of blood.

They’re bitchy, they’re irritable, they’re downright repellent in some cases before they’ve pounded a few salted caramel macchiato lattes. Don’t even talk to them until they’re had their red eye, or their green eye, or whatever cute name they’ve come up with for an unreasonable number of unreasonably espresso shots crammed into a cup. And they know what they like. Everyone that drinks coffee has the perfect method of making it, and they’ve got a perfect way of telling others how to make it too. A skinny latte, a soy cappuccino, a frappucino, a blended iced toddy, a steaming cup of whipped cream and ice cream, and pumpkin spice. All that shit to mask the taste of coffee. From what I’ve heard it’s bitter, so no wonder I see people putting 6 fucking packets of artificial sweetener in it.

No word of a lie – there are packets of artificial sweetener on the tables here. And they make it very well known what they are; they say aspartame, and sucralose, and all the rest on the back. I guess some people know that, so they go with the weird sugars instead, which apparently are becoming popular. Every few months someone has figured out a new way to derive sweeteners, both artificial and real from new sources. High fructose corn syrup, corn syrup, Cactus juice (It’s ‘agave syrup’ but my way is funnier) stevia, sugar in the raw, cane sugar in the raw, maple syrup, maple sap. I’d love to know which fucker decided that it was super healthy to put butter in their coffee. They call that bulletproof coffee, and I can only assume that’s because it forms some sort of impenetrable coating on the top that is akin to kevlar or ceramic plates.

Then the milk, the cream, the mix, the water, the whipped cream, the half and half, the ‘creamer.’ The soy, the coconut milk, the almond milk, the lactose free milk, the 2 percent, the whole, the skim, the…. fucking peanut water or something, or corn water. It’s coming. Wait and see the health nuts explode when someone manages to make a milk like substance out of kale, or artichoke hearts, or some other superfood. Skinny half-fat kale latte smoothies all round lads, with 4 heaping teaspoons of all natural, totally unnatural sweetener derived from some chemical run off from some industrial process.

I’m amazed there aren’t warring factions out there right now loading stones into slings because the other sides dares to use a paper filter instead of a hemp filter. People get very uptight about their coffee. There are coffee snobs, as there are any snobs, but the coffee people are all drinking essentially the same thing – hot bean infusion. They put it in french presses, because that’s the most pure coffee – it doesn’t pass through a filter. Or they put it in a keurig because that’s the most pure coffee – it’s a perfect individual serving. Or they put it in a Kemex, or a percolator, or an infuser, or it’s cold brewed, or vacuum siphoned, or it’s the most concentrated coffee known to man and it retails for thousands of dollars per bottle. Costs more than gasoline and champagne combined, which sounds like the world’s most decadent cocktail in a post-gasoline apocalypse. They should call it Sumatran whiz-bang. With half and half.

According to this here infographic that I stumbled upon, coffee is integral to the American experience. It became patriotic to drink coffee over tea after the Boston Tea Party apparently. 80 percent of Americans drink coffee, people will wait a full week out of every year on line for coffee. These people love the shit out of coffee.

And I’ll tell you why, most nervous of readers – they’re a jittery fucking people, with too much shit to do. I’ve noted that most days in America, aside from those holidays where people don’t work, are full. There’s work to be done, often 8-12 hours worth of it. There’s restaurants to visit, there’s coffee houses to go to, you need to socialize, you need to work out, you need to watch tv, you need to participate in the running of the Americans every Black Friday. There’s such a monumental amount of shit out there to fill your day with that I don’t believe your average American could do it all without the stimulated brought by that most legal of highs – coffee. Examine, if you will, the countenance of people in line for coffee in the mornings, especially when it’s busy. The baristas are hopped up, having necked a heroic amount of coffee during the wee hours of the morning. But the customers haven’t had their proper coffee yet. Some may have had a quick cup before they left the house to steel themselves against the trial that is getting to the coffee shop.

But most of them look pretty miserable. It’s the look of a drinker waiting for a pint at happy hour on Friday after a miserable week. It’s the look of a smoker walking to the all-night garage to get cigarettes after they couldn’t sleep without one more smoke. It’s that universal look of addicts that are super close to the score, but there’s something keeping them away from it. In this case it’s other addicts that had the good sense to get there earlier. I’m not bagging on coffee drinkers for being hooked – I’m hooked on nicotine, I get it all too well. I’ve worn that face while walking to the vape store after a night without my preferred stimulant.

The Americans I’ve met are generally ok people. No larger a population of assholes than one would expect, a few exceptional individuals, but no more so than any other population. “Never take an asshole on vacation,” someone used to say, “for you’ll only find one as soon as you get there.” Might have been my grandfather that said that, not sure. But I feel like the American people are tense, so the legal upper that is coffee suits them down to the ground. Their day is full, and can be made fuller with coffee. More activities can be crammed into those hours between sunrise and sunset, and with coffee the hours outside of those can be claimed.

They’re a tightly wound people. Just watch the outrage that happens when someone asshole tweets about some other asshole, and then asshole A apologizes, at which point no one believes them, because everyone took the liberty of flying off the handle immediately so they wouldn’t have to waste time doing it later. There’s a phrase – “Going postal” – that means people have completely lost the plot and shot up their office, which was usually a post office. This wasn’t coined lightly; it came into existence after a real-life series of shootings. The US went to war with Afghanistan a month after September 11th. I imagine the US scrambles the jets a lot. People shoot at each other, because someone was holding a pack of skittles, or a wallet, or a phone, and asshole A thought that was a clear and present danger to their life.

As a country, people love coffee. I don’t know if that’s what’s making them nervous, but I’m sure it isn’t helping. Your two main recreational liquids in this country are coffee and alcohol. You’d think the beer would cancel out the coffee, but that doesn’t seem to be the case. Americans seem to fly off the handle with regularity and aplomb. It would be utterly foolish to suggest that the nation ban coffee. Foolish to suggest they ban anything, come to think of it. I just think it’s kind of poetic and appropriate that this country’s drug of choice is caffeine. The land of 5-hour energy, the land of pint cans of monster, and blitzkreig, and booty sweat. It’s a balls out screaming charge towards the future, and the grabby handed motion of collecting and exploiting as much time as humanly possible. Each coffee drinking American grabs their cup of joe in the morning, and pours liquid power into their veins. They’ve got shit to do son, so get the fuck out of my way, pour some of that thunderwasser into my mocha and lets get this shit done at breakneck pace.