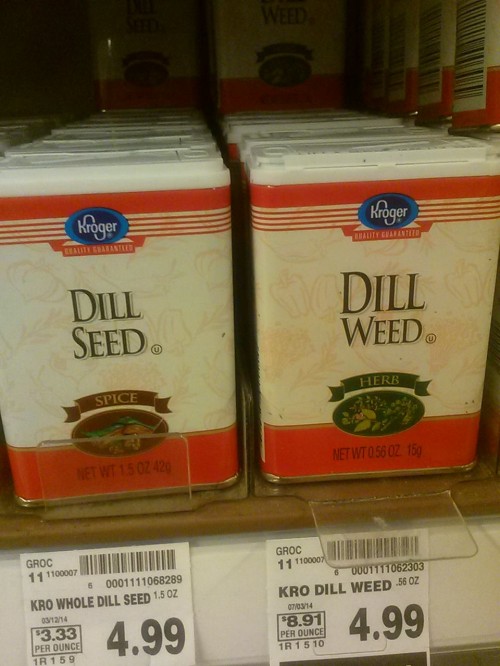 Even the herbs and spices are insulting

As far as I’ve seen of it, America is a country of big ideas. Ideas like a constitution, to enshrine the rights that the people have. The interstate system, or the great public works of the 30s and 40s. Never was a job done by halves out here. To quote Ron Swanson “Never half ass two things; whole-ass one thing.” So when it comes to opinions, Americans have opinions wholeheartedly. And they’ll tell you these opinions, whether you like it or not.

They’ll sing it from the rooftops, on radio, or television, in newspapers, on blogs, in magazines, on the sides of blimps, in your dreams. Wherever you can think of, someone will post their opinion, and they’ll go on about it at great length, because by gum there’s a first amendment that lets me say whatever the fuck I want, whenever the fuck I want, with very few restrictions.

Back home, there’s a very different culture. People have opinions, sure, but there’s nothing better than knowing something that someone else doesn’t in Irish culture. Secrets, and rumors, and half truths are abound and people love them. There’s no happier an Irish person that’s got some dirt on someone. But knowledge about the other locals is power, so often you’ll hear about someone that just got knocked up by someone else, even they they were both seeing other people, and sure your man is only recently separated from the wife, because (and I hate to gossip) but she was running around with his uncle. Knowledge is power, but it only retains power through its rarity. Secrets and knowledge go hand in hand back on the island. The more you know about your friends, enemies, and neighbours the more power you have, provided that they know as little as possible about you.

People fish for information on you at every possible moment. Cashiers in the grocery store will ask you some rather personal things, because sure they see you in there all the time. It’s not because they think you two are friends, it’s because there’s dirt to be had. I was an enigma among these people, because I drifted in and out, and I wasn’t the most social of creatures. I usually went to other towns to socialize – other towns that had my friends in them. So when I would walk into local bars, I would be asked what part of America I was from, and how long I was visiting for. There was usually a look of bemusement on their faces when I told them that I was from the part of America that’s in Ireland, 10 miles away from here, in the same county as them. My accent is neither Irish nor American, but people can never seem to peg where it’s from. It’s a wonderful trick I have.

But in America, people will tell you this kind of information without solicitation. You don’t have to dig and pry, people will out and out tell you. Pictures of their dinner are on Twitter, they’ll post to Facebook about the nemesis they have a work, people will extol and vomit forth all information they have at the drop of a hat. They’ll even tell you about the time they dropped their hat. I’ll take a brief second to say that I’m not against this. It’s nice to talk to people that genuinely care about what you have to say to one another, and don’t immediately turn that back against you as some kind of parochial weapon. Information is really power here if you keep it to yourself.

Americans are more than willing to share information with one another, which makes the surveillance state they have here all the more confusing. There’s the FBI, the CIA, the NSA, and the DHS and they all want as much information on you as possible. They’ll wiretap you, steal your phone records, keep every piece of information on you on file in perpetuity. And the response I hear from most people, mostly American people, is that if you don’t have anything to hide, this shouldn’t worry you. Because people aren’t stingy with information about themselves, they don’t understand why other people would be. In a world where you’re happy to post your location on Facebook, and your innermost thoughts on your blog, what sense is there in keeping things back from other people?

The level of sharing is very endearing to me. You ask people how they’re doing, and they’ll tell you honestly. And if they’re not doing so well, you want to help, and you’ll hear a story about that time they weren’t doing so well, and maybe you’ll help, or they’ll help, and there’s a whole lot of helping, and sharing, and care bear staring going on. It’s lovely to feel supported and nourished as a person, because people are honest and they don’t come to you with a lot of bullshit.

However. And there’s always a however isn’t there. Sitting upon the log that is this conversation, this bullfrog of doubt and malice that’s about to enter. With this naked honesty comes a lack of self censorship. People will tell you what they think, without reservation. They can’t stop themselves a lot of the time. And some of it, like the stuff that comes out of the mouths of the crazies, is downright frightening. An American is not usually a person that’s interested in suffering in silence. They will suffer loudly, and in public, and you’ll get it in the neck any time you’re around them. If you think these statements are about you, they’re not.

Disclaimer: WTF America is a comedic take on American culture as viewed by an outsider. Remain calm.

It’s like the religious people that stand on street corners, or the guys wearing the “The end is nigh” sandwich boards, or it’s the politicians on TV, or it’s the celebrities weeping on daytime television about how traumatic it was to write their autobiography, because it contains chapters about the time they went to the amazon river and the dreaded candiru swam up their urethra.

You hear shit that you wouldn’t choose to hear in a lifetime, like the urethra line above. I don’t care that Bill Clinton gave an intern a cigar. I don’t care that somebody tweeted a penis picture, I don’t care that celebrities grocery shop like normal people. Every day, and every where, you’ll be inundated by information in America. It’s everywhere. You’ll be informed that this product is better than this product because of a series of features that the two products do not share. The constant stream of censor-less, unkempt, relentless, ever present information begins to push things out of your head. You forget what fresh cut grass smells like, because switching you Geico can save you 15 percent on your car insurance. There’s nothing that stops this torrent of information other than abstaining from listening.

And my god the opinions of regular folk. Have I told you that they’ll tell you things unprovoked? You’ll mention something off hand, like money, or the economy, or something that the president said, and a series of slogans will fall out of their mouths. A verbal diarrhea of bumper stickers will flood its way across the table and it will begin to drip down the far side onto your brand new shoes. Their irises dilate, they grip the table with both hands, and the torrent continues unabated, filling the restaurant floor ankle deep with opinions, factoids, half baked theories, talking points, and blather blather blather. Their arms stiffen, their back arches, and they begin to turn inside out, pushing every single opinion they have out of that hole in their face. By this point you’ve become impressed that these people have anything left in the at all, and they haven’t turned into a california raisin version of themselves, all shriveled, bitter and at last opinion free.

Nobody censors themselves, because they don’t have to. The only thing you have to lose in this country by saying something is friends, or maybe a job. You won’t lose credibility, because anything you say can be defended as opinion, and your right to free speech. Even if the things you say are completely repugnant. Repugnant by any definition of common sense, or human decency. Racism is ok, as long as you’re not in some position of power. It just depends on the people that you’re being racist towards. And even then, there are people that are openly racist to your face, and they’ll sit there like a smug shit with an unreasonably proud grin on their face because they’ve offended someone. Not that I give a shit if you’re offended, it’s not a productive use of my time to avoid offending others. Trigger warning: you’ll probably think I’m an asshole because you’re fond of something I’m making fun of, like Betty Crocker Reese’s Pieces make-at-home box candy bars.

People will say things on Twitter, on Facebook, in person, with bumper stickers, on billboards, on political attack ads, and your mind boggles that someone would expose themselves like that. But here isn’t Ireland – back on the island these statements would turn you into a pariah. But here, who gives a fuck, you can say whatever you like. No matter how fucked up it is, because it’s constitutionally protected under almost all circumstances.

And I love it. Yeah, given the right to free speech people will say the most horrible shit imaginable. But it lets you know where they stand, and then you know where you stand in relation to them. You don’t have to talk to their neighbours to find out what paper they read, they’ll straight up tell you they hate mexicans. But people don’t bullshit you like they do at home. They won’t talk you up in your company and then be shitty about you every other day of the year. And since most people don’t give a fuck what you think, you can say whatever you like too. Most of the time. And thank fuck for that – this book would never get written otherwise.