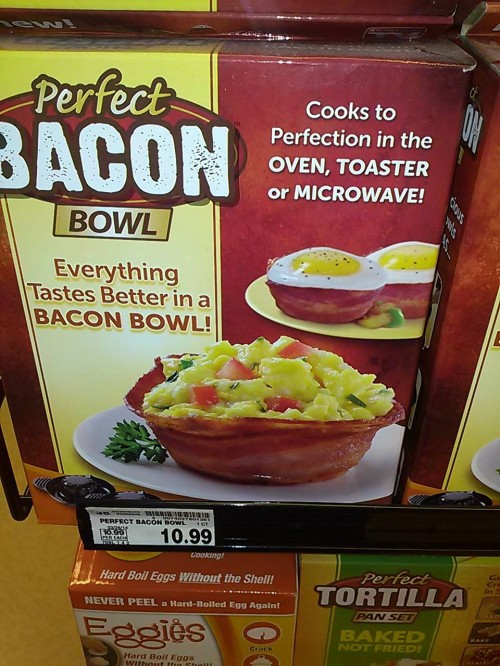 So the ad men, the PT Barnums of this world, the marketeers, and the bullshit artists all want to sell you something. This isn’t surprising, this is their business. But that oft quoted line that PT Barnum probably didn’t actually say – “There’s a sucker born every minute” – has been intriguing me since I began studying the foibles, eccentricities and plain old WTFs of this American planet. And some of the greatest of these WTFs come from the ‘As seen on tv’ products.

Our good friends and progenitors across the sea are not unaware of these concepts. There’s late night tv shopping, where buff assholes with mullets will sell you this year’s flavour of elliptical, cross fit, underwater, on the moon strider that burns fat and guess how many minutes per day you have to use it for? It’s always 6 isn’t it. Why six? And you can watch tv while you use it, or you can knit or read while some electric weight belt shocks the bejesus out of you. We have these things back home too. There’s even a local catalog that comes around, much like the Avon lady, or the Mary Kay, or the Pampered Chef or those other programs. Ours is called the Kleeneze catalog, and it’s chock-full of this shit. Special tupperware that is designed specifically to hold bacon, or a certain type of cracker, or a house coat that you can plug into the wall, or a little metal cat silhouette with marbles for eyes that’s stamped out of metal. You put this cat in your garden. It frightens other animals.

The products that show up in this Kleeneze catalog are largely shit. But their purpose is not to be new, or interesting, their purpose is to solve a problem you didn’t know you had. You didn’t know you had this problem, because it never crossed your mind that you needed to put down slug poison, or to buff wooden tables with the same stuff bartenders use. The simplest answer is that you don’t have these problems. These things are filling a niche in your life that their existence created, and then your mind puts them in that slot because there’s an empty double-wide electric slipper shaped hole in your life now. And this catalog just so happens to have this double wide slipper of your dreams. These products aren’t innovative, they’re just things. Evolutionary dead ends when it comes to product developments.

But that dead end never stopped an American; an ad man, a Barnum, a huckster. At the top of this post there is a picture of a bacon bowl. This isn’t a bowl that looks like bacon, or has a bacon print on it, it’s a bowl MADE OF BACON. Because fuck me lads, “Everything tastes better in a bacon bowl.” Fabricate this shit in the microwave, or the toaster oven, or your real oven if you’re still a philistine that cooks with fire. We’re cooking with rays over here lads, and they can transmogrify bacon into a bleedin’ BOWL. The device itself is a piece of plastic that looks a lot like the old analog lemon juicers. Place bacon on there, microwave, and you’ve got a bacon bowl. It doesn’t even look all that large on the box art.

Why am I talking about this? Because this thing makes “Perfect” bacon bowls. I’m unfamiliar with the disaster that is an imperfect bacon bowl, but this thing typifies a mentality – It’s new, and it’s more than likely improved. But is it though? Is the strider that’s on late night tv any different to the one that was on sale last year? Is this pizza with fritos on top a vast improvement on the concept of a pizza? Honestly, it looks like a large step backwards to me.

Let’s divert into the rats nest that is Apple. Each year the Apple corporation has been putting out the same phone. No bullshit – it makes calls, it receives texts, it takes pictures. Oh but this year it has image stabilisation! Or this year it has a thumbprint scanner. Or this time it’s the size of a gideons bible in a hotel, so it looks like you’re talking into a fuckin’ ham sandwich, if you ever were to make a call on it. And with utter glee, people will point out that the iPhone you buy this year has the features that the Samsung Galaxy had four years ago. That doesn’t make iPhone buyers dumber, and it certainly doesn’t make Samsung buyers smarter. I get being an early adopter, and I get waiting until the technology is refined so that you can get a better version. But the changes have become so incremental as to be barely notable. And it’s very predictable with the phones now. One brand will have the newest features, the other will be the slickest, the others will be cheaper, but by and large I think you’ll find they all get Facebook and they all make phone calls. Not that anyone makes phone calls anymore.

Are the cappuccino lays an improvement on the world of potato chips? Or the chicken and waffles flavour. No, they’re just new. And that’s where the hucksters make their money. Either you’re going to buy a slight modification on an existing product, because of the novelty of it, or you’re going to buy the same thing again because it’s in a different box now.

It’s not like I’m mad at these people for selling this nonsense, I’m just aware that there’s a few things at play here. Probably the most important thing is the concept of built in obsolescence. If you’re unfamiliar, it basically means that products are manufactured to an inferior standard so you’ll need to replace them more frequently. You hear of cast iron pans that have seen three generations of cooking, and then your new (and improve) teflon, ultra nonstick pan that literally (literally I say!) is so nonstick that the food will hover about a 1/4 inch above the heated surface, flakes to shit within a year. Now there’s an argument that this isn’t actually a plan, and they just don’t make them like they used to, because the profit margins are higher, and you’d be right. The profit in a lot of this junk lies in the volume moved, not in the high sticker price. The flip side of that coin is that we can see the planning. The first generation of iPads didn’t have cameras, but the second did. You can probably imagine why. This practice bothers me, because that stuff does have high sticker prices. To probably not quote PT Barnum again “A fool and his money are soon parted.”

Another facet of this business model is that it’s cheaper to replace something than to repair it, largely because the percentage of repair shops has declined to the point that you’ll have difficulty even finding a place that will do maintenance. I don’t really have a general point here. This isn’t a uniquely American phenomenon, there’s plastic crap all over the world. Bottled drinking water, tourist tat, little keepsakes that are kept for the sake of the keeping itself. I just find it magnified here, because there’s a sale to be made. I see it everywhere. In the tv commercials it’s hard to find a genuinely new product, you just find an improved version of the old one. It’s cheaper, it’s faster, it’s prettier, it will revolutionize your life. I have noted it can be handy to have a light on my vacuum cleaner, but it’s hardly like man walking on the moon or discovering fire.

This new steam tight countertop oven cooks a 9 pound chicken in 15 minutes. This electric steam mop can clean anything off anything. These boner pills cause 40 percent less heart attacks that the leading brand! It’s mind boggling to see the audacity of some of this advertising. Companies will take pot shots at rival companies, either directly or indirectly. They’ll go back and forth, reacting to each other’s campaigns. I’ll admit some of these can be kind of clever, but they’re both selling a car. Some of the latest I’ve seen, the newest things in the automobile industry, are in car wifi and a touch sensor on the bumper that you can wave your foot at, and it’ll open the boot on its own. These cars still probably get less than 40 miles to the gallon, they still have 4 wheels, an assortment of seats, probably a steering wheel. Other innovations I’ve seen include a beep that lets you know when you’ve left your lane. And a beep that lets you know when you’re too close, or a beep that tells you something else. Lots of beeps.

Where the fuck are the flying cars. Or the self driving cars. Or the hyperloop, or the floating cities, or even those self-lacing shoes from back to the future. To paraphrase Fight Club – the greatest minds of our generation are pumping gas and waiting tables. It’s not that humanity, and American can’t innovate. American has done amazing things for the advancement of humanity. NASA invented duck tape, for example. CAT scans, MRIs, electric cars, advancements in renewable energy. Today, just a little while before I wrote this, the European Space agency landed the Philae probe on a comet. That’s way more astounding than a bacon bowl, or a car that has a new beep.

I’m not dismissing the creative genius that is putting corn chips on top of a pizza, but surely there’s something better we can do with our time? If we didn’t have to buy a new phone every year, would we have more time and money to concentrate on genuine advancements in technology? Or maybe we’re making plenty of advancements, and the people that spend their 60 hours a week saving the world just want to kick back, and drink a can of bud light clamato, whatever the fuck that is, and eat a fritos pizza. With some dessert topping in a bacon bowl.

I guess it takes all kinds. But come on. Novelty is not a substitute for substance.