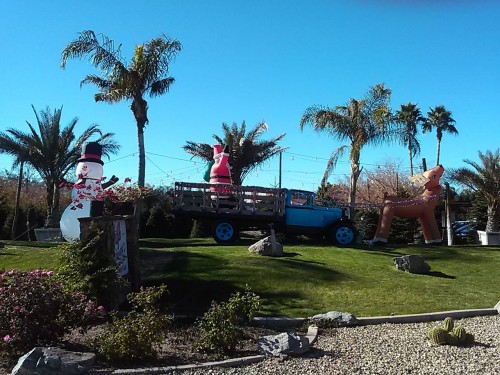 So when I moved here there were questions. Many questions. The main question from Americans was; why of all places that you could choose, would you choose Arizona? Well the simple answer, and the answer most representative of the truth is as follows. Kimberlee, my wonderful wife, is from California and she was having a little bit of a tricky time freelancing. It was satisfying work, but it was a lot to handle and the money wasn’t quite where we wanted it to be. So Kim was offered a corporate-ish job in Arizona and she took it. After a year or so of working there the company said she wasn’t a good fit, and she was handed a severance. Then the freelancing started up again, but this time it was in Arizona, not in California. This is the first time Kimberlee has lived outside of California by the way.

The simple answer is that I had planned to move to California. But, as the song goes, My love grows where my Rosemary goes. And nobody knows like me, fellas. So part we waited on the immigration process until Kim moved to Arizona and got settled. One of the reasons she moved was to provide more stability for the immigration process, so you guess you could say that it’s my fault that I ended up in Arizona.

A lot of what I hear from people that live in Arizona – because most moved here, I’ve let a lot less natives than I anticipated – is that they moved here because it’s cheaper than California. They stay because it’s cheaper than California. They settle down, and buy houses, and raise children, and start businesses because it’s cheaper than California. And it is. Moving from there to here upgraded Kimberlee from a one bedroom condo-flat to a 3 bedroom house for the same price. Food is cheaper, utilities are cheaper other than electrical – because you need air conditioning when you live one quarter of a mile from the surface of the sun – living’s cheaper. It’s more close to things than a lot of other places. I’m sure Kansas is a lot cheaper than California, but people don’t migrate there for the cost of living. I’ve heard that Ohio, a midwestern state, has fielded the most astronauts, which makes you wonder; is living in the middle of the country so bad that you have to leave the planet? (Research shows this as false – New York has fielded something like 33, the highest of any individual state)

I’ve thought about the other states. Kim and I have had discussion about places to retire, in time, or places to visit. I’ve got some good friends in the Carolinas and I’ve been told, extant of snowier winters, it’s just like Ireland. I’ve also been told that Washington state, home of Seattle, has the same weather as Ireland. I’ve also heard that immigrants have tended to set up in the places that felt like home, so the Germans and Jewish people are all over the North East, the Northern states like North Dakota and Montana have plenty of Scandinavians, and the Spanish, French, and Portuguese set up down around Florida and the Gulf coast.

So where would I settle, had I not settled in Arizona. First answer would probably be ‘Not Arizona’ but again, love-rosemary-all-that. California had plenty of fun people, and lovely weather all day most every day. I’m tempted by other places, places that get snow occasionally. I’ve lived most of my life clinging to the shore next to the Atlantic ocean, so the salty smell of that vast cold ocean might feel more like home. By the by; the Pacific ocean doesn’t smell right to me. It smells faintly of boiled cabbage, instead of the frigid salty nature of the Atlantic in the fall. It’s odd to enjoy an entire ocean at once, but had I to pick a favourite, it would be the one that surrounded the rock.

So this response from people, this question about Arizona, I puzzled at. And I now know why it is; people think Arizona is insane. So around the world people tell jokes about the country that fields the stupid people. Most often I’ve heard that the stupid nations are Ireland and Poland. But within these countries, who are the stupid people? Well in Ireland it’s people from county Kerry. Having never met a Kerryman, I can’t speak to the validity of this claim. I’m not sure which jokes the Polish tell, but I’m sure they have them too. So where are America’s stupid people?

Florida, mostly. “Florida man…” is the start of many headlines. For example, “Florida man tries to stop chainsaw blade with genitals, discovers that genitals are not fit for purpose.” When you add ‘Florida man’ to a headline, people are ready for this kind of shit. If anybody remembers the ‘bath salts zombies’ stories that the internet was freaking out about, them was Florida fellows. And again, the jokes have regional variants, so Alabama, Kansas, Mississippi, and any of the other southern states are often the butt of these jokes.

But Arizona isn’t know for being full of stupid people. As far as I can tell, given reporting and responses from the public, Arizona is crazy. It’s full of people that are insane, they have too many guns, they believe in too little government, they’re trampling on the rights of women, gay people, minorities, white people… the list goes on. From external news media, you’d believe that Arizona was constantly on fire because of the collective mass of fucking crazy people rubbing together. Spontaneous explosion from an excessive buildup of bat-shit. People point to Sheriff Joe Arpaio, the nutter that built a tent city in the prisons in his county. He’s suing Obama you know, over a recent move from the president on immigration. He was a leading voice in saying that Obama was a foreign citizen, and thus shouldn’t be president. He’s been accused of racial profiling, he’s behind the law that allows the police to check the immigration status of people that are in the commission of crimes, even if that crime is simple speeding. Note that an immigration officer told me that I was less likely to have a problem with that law, and note that the law is a direct incentive to profile racially.

Arizona’s governor, until recently, was Jan Brewer, and she was in favour of this ‘stop and papers please’ law. Combine that with the jabbering about the border fence, and the contingent of libertarians, and libertarian friendly policies in this state, and outsiders come to the belief that Arizona is not only crazy, but it’s dangerous to its own people, and to the rest of the people in the United States. My perspective is different living here.

I’ve broken bread with these people, in the metaphorical sense. They’ve sheltered me in times of need, they’ve protected me, they’ve taken care of me. They’ve taken care of Kimberlee too. I’m an immigrant, and they’ve been totally inviting, inclusive and very happy to have me around. This is the thing to remember; if it bleeds it leads. The reporting will almost exclusively focus on the worst of what’s happening in the world, and the perspective of a country that’s leaning towards equality for more and more people (Ideally all, in time) Arizona looks bad. There are policies here that people disagree with a lot, and I understand that. Sheriff Joe Arpaio is a prick. From what I’ve read he’s interested in ruling like some Sheriff of old, swinging a big stick and commanding power everywhere the light touches. But I’ve never met Mr. Joe. I live in his county, but the only encounter I’ve had with Maricopa specific services was the local courthouse that issued my marriage certificate. And there’s the key – most people in Arizona do not run-afoul of Joe, or former governor Jan Brewer. Most Americans will never get a chance to give the president a piece of their mind, because these people are by and large figureheads.

The actual representatives that are drafting this backwards legislation are local representatives that come from your area. These assholes are your neighbours, and you might very well have voted for them. The system doesn’t exist in a vacuum, but above a certain point of legislation, you’ll never encounter these people. They might as well be kings and queens for all the impact their lives have on ours. Sure, they come up with laws that we’re supposed to live by, but with the amount of laws that are on the books some things are bound to be unenforceable. We’re locking people up in the prison system for marijuana possession, but Arizona has legal medical marijuana, or it’s supposed to, but that hasn’t stopped street level says. The drug war is unwinnable.

There are assholes here. There are a bunch of catholic fundamentalists that protest, I want to say at least once a week, outside the Planned Parenthood clinic in our community. I never see these people in the neighbourhood aside from when they’re outside with reprehensible signs shouting down a paper megaphone. They pray hard. I’ve never seen people pray HARD, but that’s the best I can tell you about the actions of these people. However, terminating a pregnancy in Ireland is illegal. And however further – there are protesters there involved in the exact same behaviour. My point is – there are assholes everywhere, and there are fucked up laws everywhere. If these fucked up laws bother you, then do what it is you can to change these laws, to make the country, county, town, and village you live in better. Make the world you want to live in. Bitching about a state making a decision you don’t like, when you don’t live there doesn’t do a whole lot to help the place you do live in.

I’m not saying you can’t have an opinion on Arizona, I’m not saying you can’t be mad at it. We live in a global world, and it’s wise to be aware of this world, so you can get a barometer on what can be considered worldwide societal progress. But one crazy person in power half a world away doesn’t make the world darker, not if you’re out there making the world brighter.

So is Arizona mad? Madder than a big bag of spiders? Yeah, I guess it is. But the world’s as mad as a bag of spiders if you keep looking at isolated incidents, laws, places and people. Take your world as a whole. Tame that bag of spiders, one arachnid at a time.