WTF America: Hardly an ending at all (Chapter 28)

Hardly an ending at all 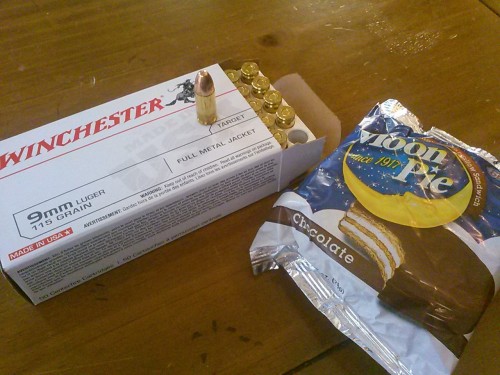 I purchased a moon pie in a gun shop.

So here we find ourselves, as I find myself, at the end of this particular journey. But much like journeys don’t really begin, this one doesn’t really end either. I’ve been musing only on the first year, and the other scattered weeks and months that I’ve experienced America for. There’s so much more to come, both in terms of a life here, and in terms of this book.

The way NaNoWriMo (National Novel Writing Month) works is that you have the month of November, just 30 days, to get 50,000 words down. It’s something I do every year because the only way to get better at something is practice, and what better practice for novel writing is there other than writing novels. The creative process is gamified in the best possible way – you have a little box to enter your word count as you write, and the more you update that box the closer you get to pushing a bar over a line. It externalizes the goal, and it turns creativity into filling bars. And filling bars tickles something in the gamer brain.

It’s almost like you’ve accidentally got a novel at the end of the month, as a side effect of filling those bars. They always say, don’t they, for they’re always saying things – “Everyone’s got a novel in them” and the purpose of NaNoWriMo is to make people externalize this novel. I’ve learned that not every novel that’s written is good, because I’ve got some junk lying around on hard drives and in cloud storage. But you wrote every day, and you had a plan, and you had a goal. That’s the reward, and that’s the lesson.

I hope to bring this lesson on board going forward, because writing about this country that I inhabit, this nonsensical land, the area between cold and baleful seas that they call America, has been wonderful. The support I’ve received for it makes me believe that this cobbled together mass of nonsense might have a shot. But we need more book before we can do that. This one’s too short, and there’s so much more America to experience. I couldn’t possible stop here, I’d be doing the country and myself a disservice.

People asked me about the things I didn’t cover. I was asked why I didn’t cover the meat ballet that is sports entertainment professional wrestling, and I must admit that’s a fantastic idea. I spent an hour or two researching the topic and realized there was so much more to it than I remembered from my viewership that lasted for a few years during the attitude era. The gimmicks, the violence, the consumerism, the hackneyed storylines, the simple villains and even simpler heroes. This is a marvellous topic to cover, however I need to get more experience with it before I can talk about it at length.

There’s so much that I haven’t done yet. I live in Arizona and haven’t visited the grand canyon. I haven’t seen the border fence that everyone assures me is full of holes, and those holes are full of Mexicans or Isis agents, possibly both. I haven’t experience enough of California to write more about it, and I would very much love to. The people are so pretty, oh so pretty, and I wonder if they’re as vacant as they’re made out to be. I haven’t been to the East Coast at all, I haven’t seen the amber waves of grain, I’ve never visited America’s hat. I haven’t driven a car here, I’ve never been to a car show, I’ve never seen a monster truck rear and snarl as the audience barks beer and peanuts over one another as yet another old chevy is turned into a pancake of its former self.

There’s the biggest mall in America, which you’d assume is the biggest mall in the world, and I haven’t seen its special brand of lunacy. I haven’t been exposed to the snows of the northern states that would, in a stroke, overwhelm every pitiful Irish snow flurry that I’ve ever seen  I haven’t experience beer pong. I was once promised shitty lattes at 3am by a friend in North Carolina, and I should probably take her up on that. I was also promised tea on a porch in the same state by another friend, and I should get in on that offer. I’ve never visited the south, never been in a truck stop, never attempted an “eat this massive steak and you don’t have to pay for the massive steak challenge,” though I’m fairly sure that’s an undertaking that no foreigner could manage without substantial training, and perhaps some surgical enhancement.

There’s so much more, and there’s a list as long as I am tall of the things I haven’t done. I haven’t touched on nearly enough topics either. American attitudes towards sex, I never talked about the movie or television business. There’s plenty of particles and parcels of American culture, pop and otherwise, that I just haven’t clapped eyes on yet, so I couldn’t possibly comment. It was Black Friday yesterday, and I didn’t head out to the local big box stores to see the frenzy. I can only imagine what that energy is like, as humans crush other humans against doors.

I’m also only in my first year of marriage. I’ve heard tale that this is the honeymoon period, and it will last for several years, so that’ll be fun to find out. I’m looking forward to a lifetime spent with this woman I met by telling her to “Make me a sammich, bish” during an online drinking contest on a news discussion website several years ago. Maybe 7 or 8 at this point. She’s been a wonderful guide to America, always willing and patient when I have stupid questions about American happenings. In fact most Americans I’ve met has been interested in explaining their culture, mannerisms, and quirks to me. Often I’ve found it more fun to play dumb that admit I know a little, because seeing someone try to explain why there’s whipped cream on their pie is often more interesting than assuming it’s because it’s delicious. And it is delicious. Oh by the way; if you microwave pumpkin pie, to heat it up a little, it’ll melt on your plate. See, I’m learning new things about this country and it’s weird customs every day.

I’d like to thank all of you that bothered to read this thing. There were calls all year to turn a rinky-dink set of images with curious captions into a book, and I was pleased to write every word of it. Sometimes examining an experience can fracture it, and then it can’t be reassembled into its component pieces. The magic leaves it, and then the memory goes a little fuzzy, and you wonder if it was magical at all. This is not like that at all. As I’ve written this month, people have been incredibly supportive, and I would like to thank you all. The intent of this book was to show the people back home just what kind of life I’ve been living over here, among these Americans, these people that eat cake for breakfast, these people that have religious breakfast cereal, and cathedral like malls. These people that drive cars that are too big, these people that put cheese on everything, and these people that have taken me in and made me feel like one of their own without trying to make me think like them, or be like them. Other than the pronunciation of aluminium, and youse can go fuck yourselves on that one. Five syllables for life.

Another hope is that maybe my American readers could see the migrants; the immigrants, with or without papers, with or without pale skin, with or without a funny language, with a little more compassion. I’ve certainly learned that Americans are a normal bunch of people, and I would hope that I’ve given them a more rounded understanding of Ireland, and of the Irish people. A little cross cultural exchange can go a long way, and I hope that I can be a part of that by asking WTF America.

And again to my readers and cheerleaders – thank you. Without you people this would just be a bunch of shouty words that I posted online, something that faded into the background noise of the internet and was forgotten. And remember that it’s not over. More than likely, this book will not only require subsequent additions, but it will also require substantial editing. Not everything that you’ve read will make it out into the world unmolested. This particular chapter is kind of a placeholder for now, because there’s a wrestling chapter to write, and a sitcoms chapter, and a car show chapter, and a road trip chapter, and so many more chapters to write. I will do my best to update the blog with some sense of regularity, but I don’t think I’ll be able to write every week. I don’t have enough things happen to me in a week to serve up hot steaming batches of WTF America, but I will be updating this book, and the blog, and everything else. There’s more America, and there’s plenty more WTF to get my hands on.

Thank you all for indulging me.