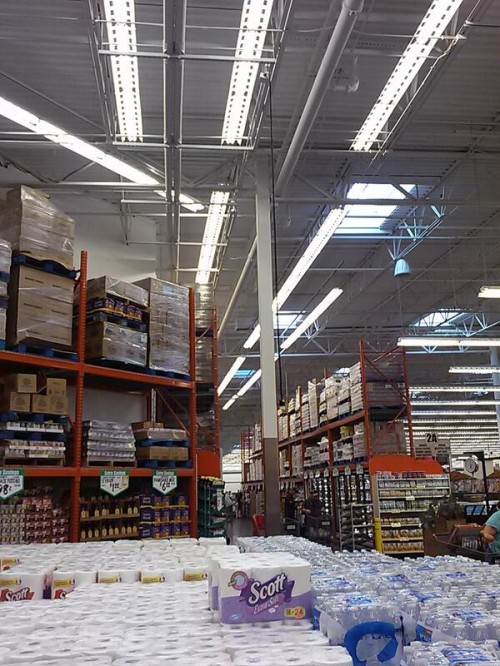 Outside the US the phrase is “Everything’s bigger in America,” but within these states, everything’s bigger in Texas. And though I haven’t been to Texas, I can attest to the accuracy of the first statement. Everything is bigger here. Coming from a small island, with I’ve got to say some fairly small people – average height for men is 5” 7’ and women is 5” 4’ – it’s pretty astounding to see this country. When your first flight takes over 12 hours, you realize just how far it is. You watch the little map pop up every so often and you’ve gone practically nowhere after an hour of flight you realize that there’s a lot of distance to cover. They call those states between New York and Los Angeles the ‘flyover states’ and not the drive-through states for a reason. Flying in the only reasonable way to transverse this country, unless you really like driving and are willing to spend the better part of a week doing it.

I was explaining to friends at home how far Arizona is from California. You can look at maps and you’ll see that they’re adjacent, but that doesn’t tell any of the story. To drive from Phoenix – where most of Arizona lives – to the southern California coast, takes around 6 hours and you need to make good time, with few stops. To bring some context to this scale for Irish people; there isn’t really anywhere you can’t be in Ireland in 6 hours if you have a car. My country is, from what I’ve heard, about the size of the state of Indiana, which and I’m sure you could travel between any two points in the state of Indiana inside of 6 hours.

My oldest friend, Adam, has a phrase and he’s told me where he picked it up a dozen times, but I never remember – To an American 100 years is a long time, and to an Englishman 100 miles is a long distance, and this phrase perfectly sums up the split between the peoples. People here think 50 years is an age. 100 years is an eternity which simply cannot be fathomed. But back home, when there’s buildings kicking around that have been there since the stone age you get a better perspective on time. But when you can drive coast to coast in 2 hours and 45 minutes if you floor it, you get a pretty poor perspective on far away.

American’s a country built around the car, and never is this so apparent when you are without one. Kimberlee and I are primarily bicycle commuters, so there’s a range of about 15 miles she could reach, and a range of 10 that I could reach if I pushed myself. That would be a totally reasonable distance at home, you could probably travel between two or three towns at that pace. But here, if you’re stuck out in the suburbs like we were, you’re screwed. Houses are built on developments, and those developments are in neighbourhoods, and those neighbourhoods cover half a dozen miles in a stroke. Everything is massively far apart.

The cluster of cities that is the greater Phoenix Metropolitan Area is often referred to as the valley, and from one side to the other could easily take an hour. That doesn’t seem bad at all, but you’re able to make that journey because you’re in a car going 80 miles an hour across perfectly paved 8-12 lane roads. ‘It’s about 20 minutes away” means it’s about 20 minutes away, if you drive at 80 miles an hour on the freeway. “It’s 20 minutes away” in Ireland means that you could probably get there in 20 minutes if you walked. You wouldn’t even have to walk all that fast. I’ve heard tell of people cycling from Dublin to Galway in an afternoon.

This scale change from Ireland to the US has been tricky to say the least. All time becomes relative to a totally new metric, which is largely based on freeway time, and the ability to drive. “Peoria’s only half an hour away” is a fine phrase, but when you inform those friends in Peoria that you don’t have a vehicle to carry you during that half an hour, then everyone starts to make calculations that either end up with the phrases “We’ll call around, see if you can carpool” or “Oh…” Because commuters in the Valley who drive cars can’t fathom getting around it without one. And the city planners didn’t have that in mind either. The whole area is set on a grid, where the major cross streets are one mile apart. So unless you happen to live on a block that hosts everything that you need and fancy, you’ll be riding quite a way.

Take the case of our electricity box when we lived in Gilbert, Arizona. Gilbert, along with Mesa, are the two cities out on the edge of the main metro area, so it’s urban sprawl that butts up against farmland. When you’re building a suburb, you put in your parks, and your little streets and you slap up your housing developments. And you note when you move into one of these developments that almost every house has a two car garage. Kimberlee did have a car for a period, but some bullshit happened there that I won’t go into.

The electricity box that we had was from SRP – the local power provider – and it housed a rechargeable card, so you could prepay your electricity. I thought this was a great solution until I found out that the nearest recharging station for this card was three miles away. A snap if you have a car – no distance at all. Now consider the last time that you walked three miles, or you rode a bike three miles. I had spent the two years previous to moving here living a sedentary life. So sedentary that I’m amazed that I didn’t turn into sediment. I guess I did, I gained 50 pounds. Anyway, getting on a bike after not riding one in a long time, and then riding 3 miles there, just to put a card into an ATM style device and feed a 20 to the same and then ride 3 miles back is frustrating. It’s tiring. And as the heat increases you wonder if you really need power all that badly.

You do. A warm spring in Arizona necessitates air conditioning. Waking up in the morning and having the absence of electricity tell you that you’re dealing with poor city planning for 6 miles is bothersome. At least I had bike lanes the whole way. That was nice. But the point still stands – this is not just a matter of car culture, or a matter of car first thinking, it’s a matter of car-only thinking. From what I’ve been told, and what I’ve seen, the Phoenix metro area is modernizing and increasing the prevalence of public transportation. When we moved to Tempe from GIlbert, the main things we were looking for was proximity. Town planners here, if any do exist (I haven’t seen a ton of evidence that indicates they do) seem to cluster shopping together, and it tends to reside at the perimeter of the city blocks, particularly the corners, and the housing is in the middle. And the housing is big, and the stores are big, and there are giant capitalist food warehouses wherein you can buy more food than I’ve ever seen.

Going for the bigger option seems to be the default option. Supersizing doesn’t really seem necessary – the large sizes of food are enormous. An American medium is typically the Irish large. You’d think that things would scale in a linear or logarithmic pattern, but it’s often exponential. The pick up trucks are gigantic, the small cars are the size of regular cars, the portions cross the line from generous to insultingly large. It’s like the establishment is challenging you to eat what they put in front of you. Often they are – several restaurants will have some sort of “eat it all and it’s free.” Or sometimes all you win is a t-shirt that says “I survived the jalapeno explosion overflowing trough challenge.” See the television show Man vs food for further research material.

I’d say that it was an atmosphere of conspicuous consumption, but it kind of isn’t. There’s no exterior or objective scale. If you grew up here your whole life the portion size is reasonable. It’s what you’re used to. The huge cars are just the size of cars, and if you ventured elsewhere, the cars would be small. Everything’s bigger here because it has to match the scale of the things that exist here. The land is enormous, and planes and cars are the only way to navigate it efficiently. I’m all for a more robust public transportation system though. The country is the width of a continent. That fact always seems to surprise me. Back before the car, it took decades to venture westward. It’s been said that you’d be with a whole new group of people when you got to the other side, and you would after 40 years. You’d be of a completely different set of ideas when you arrived at the far side too.

As America expanded westwards they just kept finding space. Practically endless space. Deserts, and mountain ranges, and the great lakes, and the billiard table states between the Appalachian and Rocky mountains. The space might drive a man mad, if you didn’t fill it with affordable tract housing, strip malls and little towns every 50-100 miles.

Aside from the things, and the land, I feel like the ideas are bigger here. There’s a fairly relentless pessimism among the people of Ireland, and I feel like we point it at one another and this stifles our ability to create and grow as a people. But Americans just kept expanding west into the space that they kept finding, and along with the highways and railroads that were installed to traverse the space, the mind had to fill up that space too – the ideological vacuum that the mind finds in empty space. I’m not saying that they didn’t expand into a space where people already lived – they did. I’m more discussing the individual experience of finding what the mind considers to be empty space. An empty house begs to be furnished, and an empty land begs either settlement or development. If only it had been developed a little closer together.