WTF America: Everything will be OK (Chapter 17)

Everything will be OK 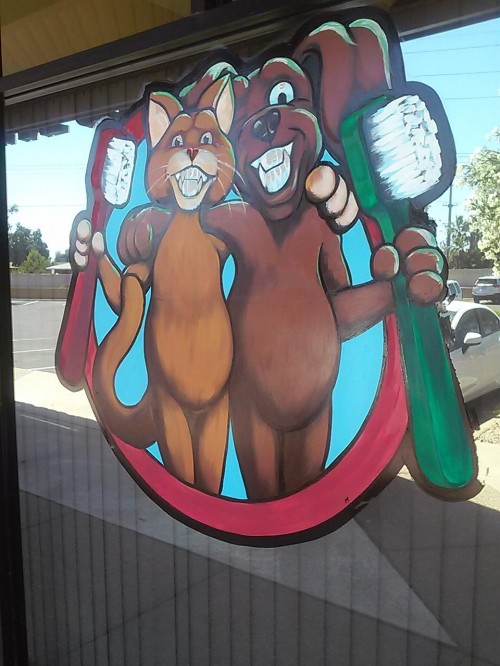 Even the animal hospital murals are optimistic

When you grow up on an island, a small island made of rock, and covered in grass and more rocks, you gain a certain perspective on the world. Your world is quite small when all you know of it is a dot on a map, clinging to the side of the Atlantic ocean. That same ocean that is cold, and expansive. That ocean that took our loved ones and ancestors in more ways than one. The ocean that extinguishes the sun every night, that brings storms, rain, and fish and whatnot. It feels like the kind of perspective that you’d gain if you stood on the edge of the world, were it flat. You could look off into infinity and see that point where distance blurs and all you see is curvature.

The Irish have never really conquered anything. It’s been said that our style of invasion is more of an infestation, which is why there are so many countries around the world with Irish pubs, and there are more people that can claim Irish ancestry than could ever fit on the island. But we don’t take over things in the way that Spain, or France or England did. We were taken over, assisted, and abandoned by these people are various points in time. We’re not a country that makes world history, we’re a country that world history happens to. I’ll not go so far as to say we’re a footnote, but we’re not on a permanent member on the UN security council.

So when you’re small, and you’re surrounded by infinity, you can get kinda pessimistic. It often feels like the world is just happening around Ireland, and once a year people remember we exist by pinching each other and turning their technicolor yawn green. I don’t recall Irish people celebrating the 4th of July or anything. There’s not an equivalent day where we drape ourselves in American flags and roast marshmallows over burning pickup trucks or anything.

This pessimism is tempered by a really interesting fatalism that I’m not sure other countries understand. The people of the old country will make some really morbid statements, and everyone will laugh, because it’s the appropriate response. “I’m so hungry I’d eat an old man’s ass through a wicker chair” pops to mind. But there are other times where people will rattle off a bunch of stuff about how well, or poorly, their life is going and they’ll remark “Sure but I could be dead. I guess that would be worse/better.” Maybe we’ve never conquered anyone because of this fatalism. “The whole world’s fucked, but hey… you’ve got to laugh. You’d cry if you didn’t” is a prevalent attitude.

I haven’t noticed Americans sharing in this attitude. When things are going poorly, people will say that they’re going poorly, and then they’ll ask for help. Or people will spontaneously offer help, and it will be received. Nobody would say “Ah, sure you’re still living. Buck up, and fuck up would ya?”

By the way, I miss telling people to “fuck up” instead of “shut up.” It’s a phrase dripping with ire, masculinity, and the right amount of ridiculous. Also if I was to use the phrase “Ah jaysus; here comes that happy fucker” here, few people would understand why I was angry at someone else for being happy.

Americans are too helpful to let you be miserable for any extended period of time, at least the one’s I’ve met. It’s not that Irish people are unhelpful, they’re just a lot more business-minding going on. And not going on – Irish people have this amazing capacity to know your business before you do, but they’ll never say anything because knowledge is only power if it’s a secret, and you can watch someone walk headlong into a fucking mistake. They’ll tell you afterwards that they knew the whole time, as a method of rubbing salt in the wound. Not all Irish people are like this. This is a book of jokes, and observations. Relax Irish people, I may speak this way for I am one of you. And youse know you’re a right shower of cunts when you want to be.

“Socialism never took root in America because the poor see themselves not as an exploited proletariat but as temporarily embarrassed millionaires” so the John Steinbeck quote goes. I think this phrase is mostly true because of the embarrassed millionaires part, never mind the socialism bit – there are resources out there, and you’re entitled to them, you just don’t have them yet. As an American you deserve a high standard of living, because you’re an American. Americans deserve a nice car, and a big house, and the other things, by virtue of being born here. There’s the other part of this that says you are only entitled to these things through work, and yeah, but the point stands.

Americans aren’t pessimistic in the way the Irish are, because there’s no belief that they don’t deserve something, should they earn it. Irish people are big on hiding their light under a bushel. You daren’t show that you’ve done well for yourself, because you’ll be pilloried. There will be snide remarks. Fuck ‘keeping up with the Joneses’ this is just bitching about success. When you’re of the belief that you’re economically oppressed, or functionally oppressed, or oppressed as a people, it’s hard to get out of that mindset. A lot of this belief is legitimate, but the Irish carry their cultural suffering around like the cross of Christ. It is heavy, and it is painful, and times were and are miserable, and have I mentioned how much this cross weighs? It’s heavy, you know.

American pessimism is a much more general pessimism. Politicians are not honest, of course pizza isn’t good for you, I’m unlikely to win the lottery. The general stuff that you’re aware of, because it’s stuff you should be pessimistic about. Irish pessimism is largely actioned through the phrase “Sure, what can you do?” There’s a lot you can do. You can get training, you can work harder, you can run for office, you can vote, you can protest, you can start a business, you can write a book, you can paint a painting, you can build a bomb, you can engage with the rest of society in an attempt to better it, or to destroy it. Do anything. Do anything other than saying “Sure, what can you do?” because you’re totally abdicating responsibility for the direction your country takes.

Citizens of the US do no such laurel sitting. They do run for office, even if they have zero qualifications to do so, because they believe. People don’t really tell them no, even if they disagree with them. There’s a belief that something can be done. Aside from the phrase “You can’t fight city hall” which I love for some unknown reason. They protest, they vote (Well, some of them, probably not enough for a truly representative sample) they change things. Because nobody dared tell them they couldn’t.

More often than not if you told an Irish people they couldn’t do something, they’d agree with you. Because that’s the culture. “What would you be doing that for?” Run for office – you’ll lose. Protest – no one will listen. Open a shop – no one will go there. I don’t get why Irish people are always interested in bringing one another down at home. Abroad the Irish will support the hell out of each other. That said, if you haven’t seen the water meter protests that are going on, check those out. Plenty of people are getting the lead out of their ass to make their voice known, and that’s wonderful to see. A democracy functions properly when the citizens are active.

To discuss business ownership, I shall bring you an anecdote from Donegal Town. There were two developers that wanted to build shopping centres. Neither wanted the other to have their shopping centre first (or at all) so they blocked each other. When you submit a planning permission application, people can object to it, which halts construction, and banjaxes the plans. So you have to start over. These bastards did this for something like 11 years. Never mind that both would have made profit, and the consumers of Donegal would have had more than one grocery store, they blocked each other. Couldn’t be letting that other guy have a single thing, was the attitude. They kept up this bickering for years until finally they reached a settlement and they agreed that construction would go ahead, on opposite ends of the town.

Then the housing and construction markets tanked in 2008, and both projects went on the chiller indefinitely. Well done lads. You fucked it for everyone. In the last few years some construction has happened, but it’s nowhere near what it should have been. For years Donegal Town has had no cinema, it didn’t have a shoe store for a long time, for the longest time there was only one men’s clothes shop. This is a small tourist town that shuts down for most of the year, because people couldn’t stop themselves from obstructing one another in case someone made out better than they did. Couldn’t let nobody have nothing. Not one fucking iota of success.

None of that here. You compete or you fucking die. If your business doesn’t gain, and maintain competitiveness, it closes. And nobody thinks this is a bad thing. If you work hard, you can prosper, so the saying goes. And people here really believe that. People start businesses all the time, people don’t take being fired as a life ending upset. The time between jobs here is more hellish than at home, by a long way. But the time between jobs is usually shorter. If you’re skilled, they’ll find work for you. Whereas at home if work can’t be found, well tough. Go wait.

Americans are optimistic, even at the worst of times. This optimism is often of a maniacal nature. Even in the worst of circumstance, there’s the belief that you can make it to the top. You’re a millionaire, you’re just waiting on the check. Through poverty, through unemployment, through natural disaster, through having the entire deck stacked against them institutionally and otherwise. The deck is stacked for some people. There are people out there for various reasons that will never get ahead, will never be millionaires. But that doesn’t stop an American. Never tell him what he can’t do. Never tell him the odds. Never for one minute try to convince an American there’s something that she can’t do. Don’t you dare tell her that she’ll never own a maserati, never have a hot body, because she’ll work bitch, and she’ll prove you wrong. So very very wrong.

I’ve seen Irish people prove other people wrong, but I’ve seen it done more often out of spite. I feel like Americans are less prone to spite, because there’s abundance here. There at least appears to be unlimited resources, so why wouldn’t you go out there and get your slice? You just have to work for it, and you’ll get it. Honest.

There’s this belief that Americans have, some Americans, that they’re exceptional. Sometimes they’re just exceptional because they’re Americans. I’ve rarely seen an Irish person with the belief that they were exceptional. We believe we’re special, especially when we’re overseas, because we become oddly exotic. I’d describe myself as odd, different, noteworthy, and a number of other things, but never exceptional.