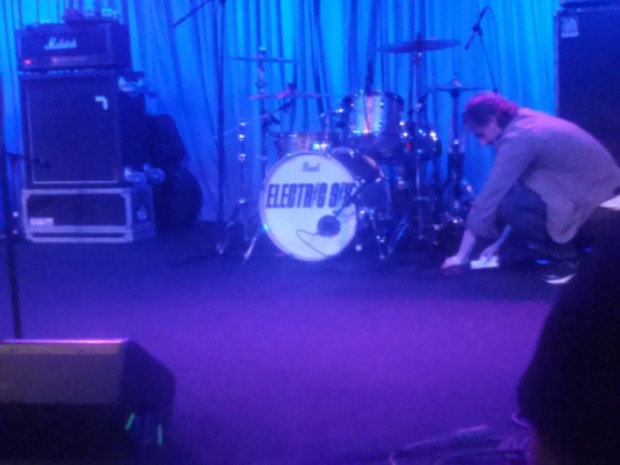 I’ll begin by saying that Electric Six is the best band in the world. There’s no questioning this, as it is an inalienable fact. Ever since 1996 during their formative years as The Wildbunch the band has been a powerhouse of rock and roll and disco, and they have cut a cross cultural swathe across the land that is American, and further afield, spanning oceans and decades. Electric Six have produced fourteen albums, and a number of compilations and the lead singer – Dick Valentine – has released a solo album. The band has gone through tumult and turmoil, losing and gaining members, and splitting up briefly before they reached the first pinnacle in their mainstream success. Electric Six is the hardest working band in the world, and their work has been justified with acclaim, platinum records and staggering wealth.

Or they’re just a working band that does ok. I was introduced to Electric Six by a friend that was also a fan of the band. He gave me what was essentially a mix CD of their personal bests as he saw it. And that mix went onto my MP3 player and became my walking music. The tempo was wonderful, and using this marching music I was able to lose 60 pounds. So yes, put that on the posters – Electric Six; miracle weight loss solution. I think that sentiment might fit on their promo material, because they’re a band that’s at once entirely serious, and not serious at all. Electric Six are kings of bullshit artistry, and that is the highest rank an American band from Detroit can achieve. It’s the highest an American can achieve, aside from used car salesman at 4 AM in Vegas, still humping the American dream at the blackjack tables.

So Electric six is probably most well known for two songs; Danger! High Voltage, and Gay Bar. These songs both appeared on their 2003 breakout album Fire! so named because the band noticed repeated usages of the word and concept of fire after the album had been recorded. These songs were my introduction too – I saw the High Voltage video on Kerrang, a cable music video channel, back around that time. My formative years of music had consisted of Nu-metal (Yeah, whatever, save your stones, I was a teenager at a bad time) and a lot of classic rock and Johnny Cash. Electric Six appeared as a group of weirdos with the strangest message and the hottest sax solo of the year. It wasn’t a good solo, just hot. The whole ethos of the band seems to be this rambunctious presentation of sex as a good thing. This is why they wanted to take you to a gay bar, and spend all your money. Unlike Andrew W.K. who is at time of writing the most party happy agony aunt in history, the emphasis wasn’t simply on the feeling good. The emphasis isn’t exclusively on feeling good, it’s on analyzing what feels good, and learning. That sounds odd, because it is.

So the learning is not your traditional learning. It’s that oblique learning that sneaks up on you. I didn’t listen deeply to the lyrics of that mix CD for years, I just enjoyed the sweet guitar and synth solos and tried to keep time as I felt my body grow stronger. But when you listen to the lyrics of Electric Six you begin to understand it’s not all about the party. It’s about race, and politics, and the spoiled nature of modern society. You being to understand that the band is focused on partying not because partying is inherently good – though it may be – the band is partying and living it up, because we live in a perpetual end of days. Since day one we’ve lived in a perpetual end of days, because none of us really live that long, and we spend so much of our time telling others the way in which they should live their lives, instead of living ours to the fullest.

Electric Six are important, and important to me, because they hold one of the highest and most important positions in society – they are satirists. When you hold a mirror up to society you expose its flaws all the more, especially when it’s a fun house mirror. To satirise effectively you must obliquely tell society its problems, and then one of two things happen. Either you have produced a Swiftian-level satire piece and your point is heard the world around because of its cutting and incisive nature, or people kind of don’t get it. I feel like Electric Six has been creating this satire of American culture for almost two decades now, and they aren’t been lauded as heroes and geniuses by anyone other than a mob of hardcore fans. I’m not saying that I’m clever because “I get it,” I’m just noting that satire is a tricky market to master. The Onion is one of the most well known satire outfits in the world, and it manages to fool some of the people, some of the time (Check LiterallyUnbelievable.org for proof) but most people now a wise person will check the URL of a story to see if it comes from The Onion. Satire loses some of its punch when you know it’s coming.

Take for example a song from the 2006 album Switzerland titled ‘There’s something very wrong with us, so let’s go out tonight.” The song is ostensibly a tale about someone going out for the night. It’s a tale of an outsider in Japan, and they’ve gone out for the night, perhaps with the intent of picking up a Japanese venereal disease. But it’s about globalization. And it’s about being singled out for a privilege denied to many, even when you maybe feel you don’t deserve it  – “The policeman he waves me through; That’s the difference between me and you.”

Then there are the examples of globalisation, which can be scary to many. There’s cross cultural pollination happening all the time, and we don’t understand it, and it pops up in weird places. Like Dutch Hip Hop appearing in Atlanta. Or a Black MC in Tokyo. Or tight new R&B in Estonia. There’s obviously interpretation happening here, and I could be completely talking out of my ass, but we shape the music we listen to because we come to it with a small and singular world that we have experienced.

You know what else shaped my musical landscape? Less Than Jake, another band that’s been active since the 90’s, and still producing albums. They’re a sort of Ska Punk outfit, with the walky basslines, sweet guitars and a brass section that’s very respectable. But their music, as much as I’ve experienced of it, is about something very different. There’s immense hope in the music of Less Than Jake, but the hope doesn’t exist here. Most of their lyrical content is about moving on, getting out, going somewhere else. You can see why this music may have appealed to me when I felt trapped in Ireland, separated from the woman I loved by an ocean and a bureaucracy.

Your music shapes your life as much as your life shapes your music. I saw Electric Six live in Phoenix a couple of months ago, and even though I had to cut out a little early to get the light rail back, I understood the band more than I ever have. This band that I have enjoyed relatively singularly for years was in front of me, and around me were the die hard fans of Phoenix, ready to rock like this was a stadium and the band was Iron Maiden. The band took the stage, and they played like they were Iron Maiden, and this was a stadium. Between songs (and the set was tight as a drum by the way, this is an incredibly professional and well practiced band) Dick Valentine would tell us stories. Stories about this state we lived in, about the band’s kickstarter for their new DVD, about their drummer that spent the first 20 years of his life siphoning gas. Siphoning, and siphoning, and siphoning, siphoning and siphoning again. And now he’s my drummer. There was the White Wolf on Guitar, and Tait Nucleus? on synthesizer.

Why do we need the satirists? And the artists? Well the quote from Queen Victoria (apparently) follows:

Beware of artists. They mix with all classes of society and are therefore most dangerous.

The artists occupy that space in society that maybe isn’t well paid, and isn’t always glamorous, and takes a toll on a person. But it’s importance can never be overstated. The lives of all are reflected in art, and we reflect our lives by these things that we as a species create. People weep at songs, and people party. People marvel at paintings, and we burn books. Satire is incredibly important in our art because satire is supposed to be a weapon that cuts deeper and leaves bigger scars than any blade or bludgeon. Think a moment on the legacy of George W. Bush. Will we remember his tax policies, or his war mongering, or medicare part D? The historians will remember, but what will be most prevalent in his legacy is that he was a fool. Everyone made fun of him. The bards can make a mockery of a man, even after his death, they can erase his legacy, they can point out that the king has no clothes and we will realized that we’re being duped, and we’ll feel ashamed for being rubes but we’ll laugh with them.

What does this have to do with WTF America? Simply, Electric Six are the best of American music. They’re political without being preachy, they’re smart without being aloof, they rock without being cliche, they’re disco without the flared trousers and cocaine. They occupy a nether space in culture, one which I enjoy dearly because it often exists in no other capacity. I listen to their albums on loop as I write this book, because the sound and the cadence, the rhythm and the rhyme, the lyric and the lesson are all American as Late Night Obama Food to me. Each listen to each album presents me with new lessons about this land I live in. It’s immersion therapy, and I’m seeing sparkling results.