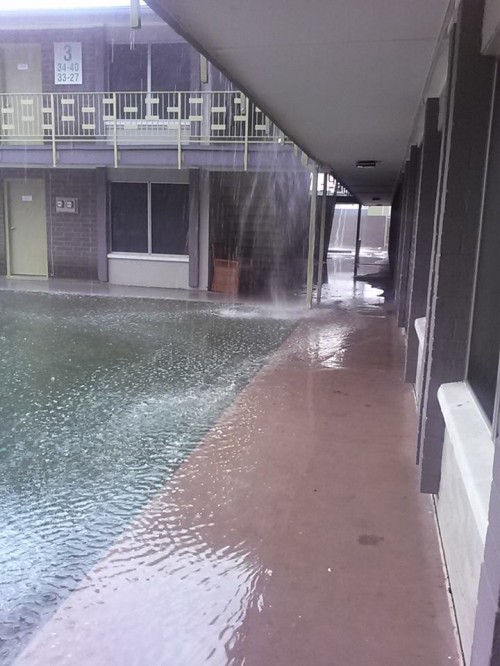 The weather in Ireland is a constant topic of discussion, largely because it’s continually happening to people. The wind buffets you, the rain soaks you, the frost chills your bones, the snow coats your car and makes everything quiet. Even the heat at home is different – the humidity makes the comparatively mild summer temperatures inflated to the point that people think it’s hot. An Irish summer doesn’t hit 100 degrees fahrenheit. It might hit 90 degrees for a few hours, once per decade, during which hours everyone will take themselves outside and burn themselves to a crisp, because hot sunny weather is a total anomaly.

The heat is not an anomaly here – it’s what will make your life hell all summer. And I say summer… Arizona is a desert, which means there’s a local climate which only has 2 seasons – cold, and summer. The cold feels colder than it is, because of the lack of humidity, which makes the winter wonderful for me. Everyone else brings blankets with them in addition to their layers, and hand warmers, and all sorts of other solutions. I just grab a hat and maybe a coat, or usually a decent hoody. Winter is not hard here, which is precisely why a certain subset of people called ‘Snowbirds’ live here. A friend of mine saw his first snowbirds on the tram the other day. These are wealthier, older people that just do not enjoy spending winters in the northern states of the US, so they come here. I’ve been told they drive slowly and they enjoy early bird specials in restaurants, however I have not met any.

I arrived here on October 31st of 2013, and the weather was nice. It was downright lovely for my body which had been preparing for the onslaught of another winter that had snow in it. I experienced a few days of rain in several months, and temperatures were cool, but I spent a great deal of the winter sitting outdoors in a hoody drinking beer. It’s warm here, even when it’s cold. Well… the desert drops down to some very chilly temperatures during the night, but most of the time there’s not a bother on you if your plan is spending time outside. Some of the mildest winter I’ve experienced in my life so far, so I can see why these birds of old-leather flock themselves together.

Spring is dry here. There’s a little rain, and it can get muggy and humid, but it’s not really hot. People brighten, and everyone gets happier as the temperatures climb up again. 80 to 85 degrees, your average hottest day of Irish summers, is a wonderful temperature out here. When that temperature presents itself in springtime, you get to wear a short sleeved shirt or shorts for the first time in the year, if it presents in winter time you’ll be glad of the warmth, in autumn it means that the back of summer has been broken and it won’t be so hot anymore.

85 degrees does not appear in summer. Well it does, but only in some very specific circumstances. The first bullshit place that it appears is at 4am. That’s can be the lowest the temperature reaches for weeks at a time, and it’s a kick in the teeth. This temperature was your favourite just months beforehand, but summer in the valley to unlivable. Oh people live here, and they run their air conditioning around the clock, and they invest in ice blended coffee drinks, and sun screen, but the whole thing is a farce – without electricity the valley would be empty within a week. People can’t live here without massive human intervention. The water works alone must be astronomical, and they are. There are fake lakes, and real canals all over the place, there are water conservation efforts, there’s bottled water, and somehow the whole things keeps humming along as a reasonable pace, and I don’t understand it. Everyone pretends that they don’t live in a desert, as much as is possible anyway.

But it’s a thin veneer that starts to crack once the summers get to punishing status. My personal highest temperature day was at least 107 F ( 41.66 C, repeating of course) at least that’s what official sources told me. It may as well be 120 if it’s going to be 107, because it’s at that point you become convinced that the sun is, in fact, trying to kill you. Man consistently demonstrates this hubris, this belief that he can outfox the sun every single year, for 4 months of the year through the use of popsicles, pool parties and alcoholic soda pop. It’s all nonsense of course. People get mad when it’s hot, and this is not behaviour I had experienced when it got cold. When it’s cold people get quiet, introspective, they draw in as the season, year and nights draw in with them. Winter makes you small. A desert summer is just trying to kill you.

It’s not trying to inflict an existential crisis upon you, it’s trying to cook the skin off you, to turn you into a mummy, to steal the moisture from your cells and make you a pile of scabby ashes within a few hours. And it can do this even to the wary, and to the conscientious. I spent maybe 90 minutes in the pool in May, and I got the worst sunburn of my life. This greatly tinged my view on summer as I spent several weeks in shadow, shade and indoors cursing the day-star. The problem is that Phoenix is apparently located about a three hour drive from the surface of the sun. The sun is an intimate neighbour, an oppressive overlord, and the most ever present reminder of the hubris of man.

We’ve decided as a species that we can live here, on this sun blazed land, because AND I QUOTE “It’s cheaper than California” and “You never have to shovel sunshine.” These may be perfectly valid reasons, but for 4 months of the year, you become a cave dweller, pressing the most moist parts of yourself against air outlets and pretending that this is somehow better than some other nebulous option. And nobody who lives here is willing to soft soap you on this fact – Summer sucks. Nobody will tell you “It’s not so bad,” or “Everyone’s exaggerating.” They will tell you exactly how horrible it is, in great detail. Perhaps not as much detail as I’m going into, but there’s a 4-5 minute conversation with every person you inform of your newness to the valley. Estimates vary, but you don’t become accustomed to summers here until you have endured anywhere between 1 and 5 of them. Having endured 1 of them so far, I can say that it’s possible, but it is in no way comfortable. If you’re interested in spending any time outside within four months – say you need to walk from your car to the store, and back with groceries, or you want to sit on the patio of a bar, you’ll be hot.

Many pubs, and outdoor malls, and other venues provider misters – a series of mist generating sprinkler heads that do exactly what you think they would do. When the mist hits your skin, and it evaporates, it does cool the skin. But this is another cheat against the elements. You’ll be hot. Uncomfortably hot. And you’ll be 20-30 degrees hotter than you would want to be, and you’ll be that hot for months. I can’t stress this enough, and neither can most people I’ve met.

But we’re still here. Because it is cheaper than California, and there’s no snow. It almost doesn’t rain here at all. I said that you only see 85 in summer under some bullshit circumstances. Those other circumstances include dust storms and rain. When it does rain here, it’s monsoon rain, and that’s not a joke – it doesn’t drizzle. It doesn’t pitter patter, it pours. Absolutely pours down for maybe a few hours and then nothing. For weeks. When it does rain, or it’s overcast, or a dust storm blows through the temperature plummets. And the brief respite is glorious. You will bask for an hour after the weather happens, when the air smells both like dust and no dust – the rain knocks the dust from the air, and puts it on the ground, so it smells like petrichor, and it also smells clean.

My first real dust storm scared me. I don’t necessarily scare easy, but I don’t expose myself to scares if I can help it. You see a dust storm coming by the way. It’s a wall of dust that rolls over itself like a wave as it steams towards town, and it does move quickly. I was watching its progress, watching the visibility drop, and then I retreated into the house, as the wind picked up. When the storm is above you, it becomes dark quickly. Not pitch black, but dark, and the air is suddenly made of fast moving sand and dust. Dry-as-matchwood trees lose branches, palm trees lose fronds, power may begin to drop out, roofs will lose loose shingles. Anything lose will move. But when the storm passes it’s quiet, everything is filthy, and everyone ventures outside because it’s a little cooler now.

People have no business living here, at least not during the summer. But here we are, drinking beer, maintaining huge electricity bills, and gritting our teeth, because it’ll be over soon. Temperature drops below 100 in September. August usually gets a lot of rain, so we’ll have cool periods. July is when monsoon season starts properly, so it won’t be too bad. June is usually gloomy, the overcast days are quite nice. Only 4 more months of lying to ourselves until summer’s over.