American as a second language 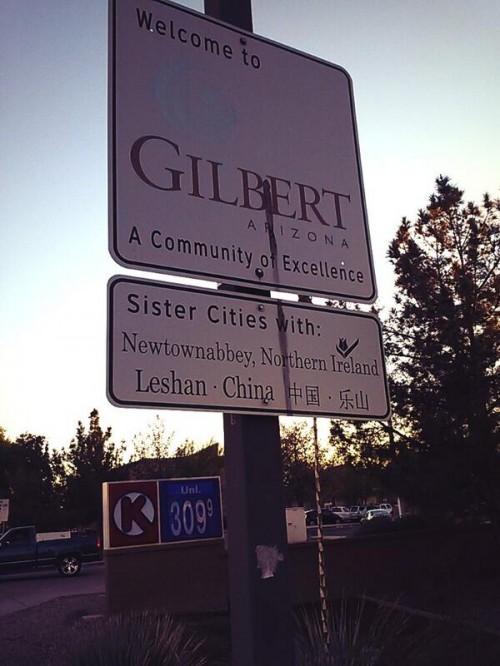 So fella there, you’re not as green as you’re cabbage lookin’ are you? You’d know your shit from your shinola wouldn’t you? So come here now you, here to me now, for a pair a minutes til I get talking to you.

If it wasn’t apparent from that opening, it’s not really English that I speak, or think in. I’ve made mention before in this meandering tome that my wife thinks her and I speak different languages and we do. I speak English as a second language, my grammar patterns are completely haywire. When you grow up within a language, or a dialect, it shapes the way you think. I’ve heard anecdotes, which are probably nonsense, that the Chinese have one word for both the concepts of crisis and opportunity, and that in Japanese pictographic writing the symbol for trouble is a combination of two symbols for woman underneath a roof. Differing cultures develop language patterns to reflect the world around them, and as variances in geography happen differences emerge.

Local dialects can be quite baffling. Arizona is so full of migrants itself – of all the people I’ve met very few have been what could be considered Arizona natives – that I haven’t noted any strong influences from one place or the other emerging. But I’ve run into New Yorkers, and New Jersey natives, and people from California and Southerners. Each has their little tweaks of dialect that stop other Americans in their tracks occasionally, but these are minor wrinkles in what is largely the same language. They’re able to puzzle through the descriptions of Kaiser rolls, and other little things pretty quickly, and they all get back to being Americans after a period of time, after this regional variant has subsided.

Calling a sedan car a saloon car grinds conversation to a halt as you must explain to this other species of people what the fuck you’re talking about. I took part in a writing exercise years ago wherein we were given a concept (a cup of tea was mine) and then we had to explain that concept to an alien. Each time you were to introduce a new word, such as cup, tea, plant, hot, water, sugar, milk, you would be asked what that was. The purpose of the exercise was to understand how to convey information swiftly, and to understand that the things you write and the things you say are loaded with cultural significance, and it’s important to not alienate your audience with thought that is too specific, or dense, or culturally loaded.

That’s all well and good, but when you grow up in any culture, you’ll pick up these habits of speech, these cultural touchstones that are shortcuts to feelings that you wish to convey. Billy Connolly, the Scottish comedian is a fine example of those that are able to turn regional affectations into broader jokes that everybody seems to be able to access. The first bit that pops to mind is his anecdote about not swearing in front of his children. His trick is to speak loudly and quickly in a pattern that sounds like swearing e.g. “Geh-ta-fuh-ya-basa!” substitutes quite nicely for “Get to fuck, you bastard!” You’ve given the impression of swearing, but it’s guilt free. When you employ these things around your people, these tricks, everyone gets it.

But because these phrases are in the muscle memory of your speech, they persist when you’re somewhere else. Aluminium still exists in my lexicon, and my chops are roundly busted when it comes out. Other things are just weird to explain. It’s hard to make fun of someone for ‘getting their end away’ when what ensues is a 5 minute conversation about what the hell that even means. Other examples of these phrases include several Irish phrases that not only don’t translate well, but they don’t even appear to be words that make sense when written down. ‘While’ and ‘rake’ are fine examples. While away the hours is a phrase you can understand, as is I’ll be a while. But when you say “That’s a while lot of garbage” or he’s “some while big fucker in’he?” you lose people. While is hard to explain, because it exists alone in speech. Most of the time it just means ‘very’ but not always.

You know what a rake is. It rakes leaves. When when there’s a rake of leaves out there, it doesn’t mean there’s exactly one rake-fulls worth of leaves on the lawn. It means there’s a fuckload of leaves out there. More leaves than you’d shake a rake of rakes at. My spellchecker is groaning under the strain of these last few paragraphs by the way. Let’s see if I can’t break it. So, there’s a yoke. This is not in eggs, this is not something used to hitch oxen to a cart. A yoke is simply a thing, and specifically it’s a thing which name escapes you. You know that what you’re looking for is the ceramic lid to the sugar bowl, because you don’t want ants, but the best that comes to mind is “Where’s that fuckin’… yoke. The wee lid yok for the thing. Sugar cage. You know don’t you?” This method of thought and method of speech makes it difficult to find anything at all. Yok is also a smaller yoke by the way, in case that helps at all.

So my father had the best story I’ve heard about yokes. My dad’s a telecoms installer, so when you see those boxes on phone poles that contain the jointing point of two 800 strand cables, he’s the fellow up the pole connecting all of those. As you can imagine this is a job that might need an assistant, since untying yourself from the pole and climbing a ladder twice because you need that one thing you left in the van could get tedious. His South African work mate was standing at the bottom of the ladder awaiting instructions. His first order was “Get me that yellow handled… yoke there. Second toolbox, bottom drawer” and this item was found and passed up the ladder. An hour later a new yoke was required, this one longer, more square shaped like, with the hinge thing in the – yeah there, that’s it. By the end of the day, the van was a yoke, the toolbox was a yoke, and many of the tools were also yokes. This guy had absolutely no fucking idea what a yoke was come 5 o’clock, other than to note that most everything was a yoke. An Irish assistant would have passed no remark, but hearing the previous remark in a South African accent was worth the day of confusion apparently.

What happens when your friends can’t understand you? It’s not that you have a weird hobby they don’t enjoy, it’s not that they don’t like you or don’t want to be around you, but more than once per sitting, party, meeting or lunch, some lump of Irish culture will fall out of my mouth, unbeknownst to me and it will sit as gracefully in the air as a lump of lard on top of a flan. It reminds them, and me, that I’m not from here, I have my own customs, and then they ask to see my crazy passport. It’s not alienating as much as it is cause for pause for thought.

How can you maintain your native culture without your native speech patterns? Video calling home, and it all slips right back within a few minutes. There’s craic to be had, and yarns a plenty, and much arra-Jesusing. But when you’re living in another country and you do, ostensibly speaking what is the same language the temptation becomes to assimilate. It’s not the teasing, I have a lot of fun bantering with people. Our ripping the piss, is your playing the dozens – we have the same culture of ripping on other people, and what you need to do is make the other person laugh before you run out of good natured insults, because that’s how you win. The desire assimilate stems from the yearning to be understood, to speak the same language because language is how we get the thoughts that are inside our heads into the heads of others. Sharing ideas, and passing information back and forth is the purpose of language, and if conversation keeps grinding to a halt, because you wish to know “Cad e sin?” or if you become that hungry that “You’d eat a scabby babies’ ass through a barbed wire fence” or you’re so desirous of the water closet that your back teeth are floating… It can be a tad tiresome. But the desire is not in me to be an American true and blue. Or red. I’m not sure which is the more American colour.

I like being Irish. It’s a nice cultural identity to have. As Tommy Tiernan said, it’s the most fun and the least work as nationalities goes. Irish people are often so proud of their heritage that you’d think they chose it. And you know, I think most Irish people would choose it again, given the option. Most Americans would likely do the same I imagine. I can’t say that I’m necessarily proud of being Irish, given that I did no work to achieve this rank, but I guess I’m proud to call myself Irish, because as an immigrant to America it’s like playing on easy mode. Being a white, (mostly) English speaking immigrant is practically like entering cheat codes for living in the United States undetected, not that I need to. I’ve got my papers, boss. I like to consider myself an ambassador for my people, so I attempt to offer a worldly perspective on things. The language barrier can also be helpful to remind those people around you, these Americans, that not all immigrants came here to paint nails, mow lawns, and speak in languages you don’t understand.