A relentless abundance of pie 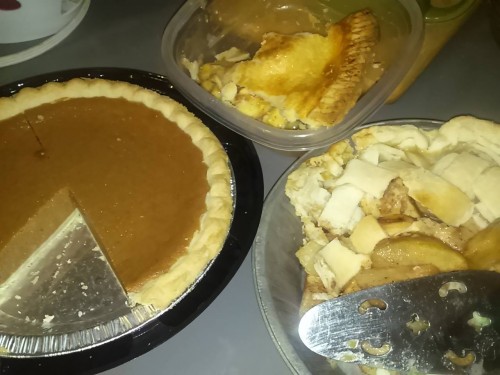 The pumpkin spice must flow.

So I’ve touched on thanksgiving before, in the chapter about how Americans eat. And this day, like no other in the American calendar is about consumption. For years it was about the food, the family, the togetherness. But most of all it was about the food. This year, with me being so far from family, and most members of Kimberlee’s family living in California, we held what we’ve heard called an ‘Orphans’ thanksgiving.’ The premise is simple – invite friends instead of family. Because you’ve got friends that are local, who aren’t going anywhere for thanksgiving, so someone elects to host and everybody comes over.

Kimberlee battered many items of food into submission and deliciousness over the course of several days. Homemade cranberry sauce, homemade gravy, cornbread stuffing with oysters, and an expertly cooked 13 pound bird. She cooked it in a paper bag, a practice that baffled me, but it’s hard to argue with the results. I had only been to one thanksgiving before this one, and it was a pretty different experience. Last year Kimberlee’s mother was living in the state, and we were stony broke, so we brought over some scratch made mac and cheese, because that’s what we had. We were still treated to abundance, as Kim’s mother laid on a spread that fed 5 or 6 of us.

Kimberlee’s mother is a religious woman, and I’ve long since hung up with altar boy robes and backed away from the church. Saying grace is also not something I grew up with, so her speech to open the festivities was an interesting spectacle for me. She made mention of the abundance of food, naturally, but we were also treated to a short oration on the treatment of native americans in the US, which I will not attempt to even paraphrase. It’s not like this information was particularly new to me, and it didn’t bring down the festivities, it was just interesting to see this perspective, on this day of great feasting. After one of the most filling meals of my life, I believe we watched a GI Joe movie, which has nothing to do with anything, but I felt it important to note the star spangled cap on this American experience.

This year felt very different. It wasn’t a small gathering of family. It was a party, of the much more decadent kind. I started drinking at 1.30, but fear not dear readers because I am well versed in marathon drinking. I’ve attended an Irish wedding or two, and that’s enough alcohol drinking training for most. The early part of the day was a few friends eating dinner, shooting the shit, and a little bit of cleaning up after ourselves. We went around the table saying what we’re thankful for, and most of what I said has been echoed in these pages before. It’s been a transformative year for me, and for Kimberlee.

This thanksgiving, I was very much looking forward to a feast. The year has had its highs and its lows, we’ve been broke, and now we’re in a spot where we could not only afford a feast, but we could afford to take our friends in. Being skint in America is not a fun experience, and to get this day where we could all throw caution to the waistband and eat and drink our fill several times over was very satisfying.

One of the main things in my thankful speech was how readily I’d been taken in by these strange creatures, these gun toting crazies, these people that drive cars that are too big, and these people that prepare feasts that are too large; these Americans. Not only did several guests provide a relentless abundance of pie, but everyone brought their kindness, and their generosity. People that I’ve known for barely a year came to my little flat with champagne, bourbon, chocolates, appetites and the aforementioned relentless abundance of pie. They brought with them a festive and thankful spirit. They also brought Cards Against Humanity, which if you haven’t played you need to get a copy of it. It’s an experience that is hard to match when you see half a dozen adults crack up into laughter because they have a series of cards that are the perfect answer for “________: kid tested, mother approved.” I’ll spare the gory details, but know this game isn’t for the weak of spirit, or the bruisable of sensibilities.

I think thanksgiving is a great idea. There’s no demand of gifts, it’s a secular holiday, and from what I’ve seen of it so far it inspires people to bring fun and generosity to the table, and to the party. I’m sure I sound a little gushy, but I don’t care – I’m amazed that the Americans I have met have been so welcoming. Within a few months of being here I already felt like I was being treated like an old friend, and now that I’ve hosted my first thanksgiving, I feel like I’ve known these people forever. It fills the heart in a way that makes the ribcage creak out with pride and joy.

But what would a WTF America chapter be without a little complaining. So to the topic that usually comes up around this time of year – consumerism. And specifically that consumerism that occurs around the most capitalist of days, Black Friday. For those not in the know Black Friday is the starting gun for the Christmas shopping, and there are deep discounts on a lot of items. The purpose of Black Friday is, generally, to drive people into a frenzy of buying, to stimulate the economy, or to fill in the ledgers of stores, or whatever the purpose is.

It’s not a kind sounding name, because it’s not a kind day, by all accounts. The trend of the day has begun to seep out into the days around it, with stores opening on thanksgiving itself for ‘Grey Thursday.’ There’s an online equivalent called Cyber monday. Retailers are extending the shopping beyond the day itself in each direction, and there’s a lot of talk of hollow consumerism. The trend has apparently begun spilling over into the UK too. There’s no excuse for it there, there’s no thanksgiving to follow. Some consumers that went out for the spectacle and the bargains this year noted that people were buying shit that they didn’t want or need, because they’re caught up in the frenzy. There’s a helpful website called Black Friday Death Count that keeps track of the injuries and deaths caused by tramplings, or customers shooting each other, or using mace on one another, because they really really wanted a $12 waffle iron.

This is the flip side of the abundance. If retailers can drop their prices this far it makes you wonder where the profit is coming from. Or it makes you wonder if the stuff that people will step over each other’s battered bodies for is worth anything at all. There’s so much shopping to be had in America, and this day, Black Friday, is like D-Day for buying shit. Most of it shit you don’t need. I’ve seen people on social media decry the tradition, but still go out to grab something because the lure of sales is too good. You’re not saving any money by the way – when you buy something, you have less money than you did before. No matter how deep the discount, you will always lose money on a transaction where you give some of your money away.

After a day of feasting, and relaxation, you’d think people would have enough. But this is a very commercialized country. There is no ‘enough.’ I don’t tar all Americans with this brush by the way – there are plenty that aren’t involved in this spectacle-fight they call shopping. But those that do make the most noise, because they will coldcock someone for a fucking tickle-me-elmo, which the child will likely stop giving a shit about before the batteries even run out. I get that shit is cheaper today, sometimes in excess of 50 percent off, but honestly you don’t really need it. It’s not important what it is, or how much you think you need it, you probably don’t. There are black friday sales for cars, for fucks sake. Such a major purchasing decision should not be made based on who can turn up to a lot with cars on it first, or 500th, or whatever the special is. Because there’s money exchanged for this stuff, it’s not called looting, but it looks remarkably similar.

There’s a relentless abundance in this country, and I’m glad to partake of it a lot of the time. A little money in your pocket, and you’ll never want for anything. But days like Black Friday remind me that there’s far too much of a good thing out there. Nobody will tell you no in America if you want to buy something. And you’re certainly not going to listen to me if I tell you no. I get that people want shit. Having shit is nice. You need your shit, your car’s full of shit, you’ve got too much shit in your house. I’ve got a bunch of shit that I use all the time. I could live without it, but for the most part I won’t, because I don’t have to make that choice. I can have anything here.

But what I liked receiving most this thanksgiving wasn’t the food, or the booze, or anything that I could have bought today, or tomorrow, or the rest of December which is the busiest shopping month of the year – it was the friendship. Belonging is better than owning every time, and sat around the table discussing the high quality of the stuffing, or sat around the table playing a card game for horrible people, or sitting outside getting a little fresh air after dinner while talking nonsense about rat-sized cockroaches making their own sandwiches… these are the moments that made my thanksgiving. The turkey will all get eaten, the whiskey bottles will run dry and get thrown out, and the shopping will continue unabated, regardless of what I have to say about it. But the memories and moments remain with me, and remind me that even amidst what could rightly be called a maelstrom of shopping, that friends are what matters.

That said, a relentless abundance of pie is forever.