Welcome to the first in what will hopefully be a medium sized line of original character biographies and details. Below is a picture of the first of these original characters and he is called Tin Star.
Just a little background information before I introduce Tin Star – He and all the other characters that I will introduce reside in Castlefinn City. This is my Gotham/Metropolis/San Angeles all rolled into one. I couldn’t manage to fit any of my crazy characters in any regular city I could think of, so I thought it best to create my own city and populate it with the craziest, weirdest, most evil bastards I could think of. 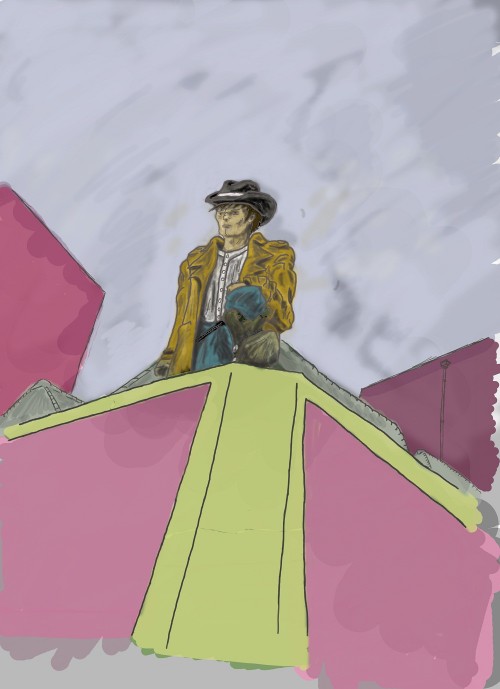 His story after the jump.

Joey Pilman was just a regular idiot working in a corner store in Castlefinn City. One day a guy burst in and held him up at gunpoint. All of a sudden a Castlefinn City sheriff burst in and started firing; the thief shot back and killed the sheriff, but died in the fight. Pilman spied a deputy badge on the floor and realized something – the deputies have the same power as the sheriffs and are subject to no laws. He grabbed the badge, hotwired a car and had the time of his life charging around the city.

The sheriffs found their dead buddy and started hunting down the missing deputy badge. When they found Pilman trying to “commandeer” a pair of shotguns they beat the shit out of him. The Maori (one of the sheriffs) held up the deputy badge in front of his face, told him he was nothing but a “Fucking Tin Star” and threw him off a bridge.

Pilman woke up in the hospital weeks later with no recollection of who he was or what was going on. A police officer was trying to talk to him about the incident, but all he could focus on was the officer’s badge. The only thing he could remember was a man holding a badge up to his face and calling him Tin Star. After knocking the officer out and stealing his uniform and badge he ran out and fled to England. Over the period of two years Tin Star became more delusional and paranoid. He convinced himself he was justice incarnate. He hunted down and killed cops that didn’t “deserve” their badges, didn’t deserve to wear the shield. He began collecting badges, he started pinning them to a trench coat and a waistcoat. Eventually he had enough badges to be almost completely armoured and nearly bullet proof.

However, in the back of his mind there was a badge, a Castlefinn City sheriff’s deputy badge. So he returned to his city with his badges and his coat and he went hunting.
The rest of the story is a tale for another time. Hope you enjoyed this first character bio, more are in the works right now.