Hello and welcome to the recommencement (that word is a lot longer than I thought it was) of hat week.

Today we look at probably the strangest hat in my collection: A tri-corner hat. I had fancied one for ages, but the ones that I found online were either too expensive, or they didn’t ship to Ireland, so the interest waned until I purchased a rather shapeless “Fedora hat”. The brim was cowboy wide, but wouldn’t hold a cowboy shape and the band was a thin leather studded number. My brother described it as a “tourist hat”, and although it was a gift for him he took no real interest in it.

After the hat lay around for a few weeks unworn and unloved, I decided to have a crack at making it into a tri-corner hat. That endeavor can be seen here 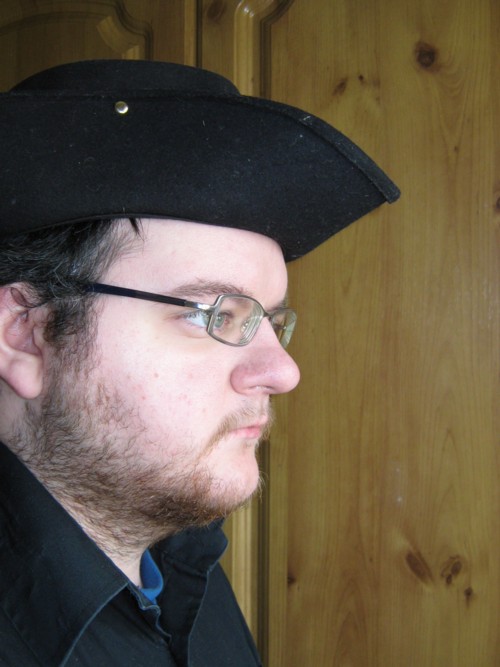 It’s different, it’s weird, I rarely wear it, but damn it if it’s not a nice hat to stick on while mooching around the garden, or drinking in the sun. More tomorrow.

My grandfather is in the hospital at the minute. He has had alzheimers for the last few years now and it’s looking like he’s not going to make it.

I said goodbye to him today. Patrick Kelly, my grandfather.
We always called him Grandad Kelly, because our other grandfather was Grandad Girr. We have trouble understanding the Mc in our last name as kids.

He built a stepladder when he was younger, and unemployed. He made things and did thing, and this gave me a love of making and doing. I’m going to copy his design of the ladder, and build one myself.